Today I'm finally going to get to set foot in one of the places that I've most wanted to visit in Japan ever since I first learnt about it. We will be setting out from Nagasaki Port and taking a ferry over to the urban explorers wet dream that is the abandoned island of Hashima; more commonly known as Gunkanjima.

As I said in the last entry Nagasaki has played a big role in the industrialisation of Japan through the likes of Mr. Glover and his associates; and as we slide out towards open water we can see one of his gifts to Nagasaki, Japan's first dry dock for ship repair and building (see below, bottom left). These days ship building is a far grander affair, but Nagasaki is still in the thick of it as you can see by the huge Mitsubishi rigs out in the bay.

Mitsubishi (which Glover was a key player in the establishment of) is actually a Nagasaki based company, and their logo was on a lot of things we passed during this trip; from these giant ship building rigs to elevators and automated carparks. So it's no surprise that Mitsubishi are also firmly connected to the history of Gunkanjima as well as we'll see. 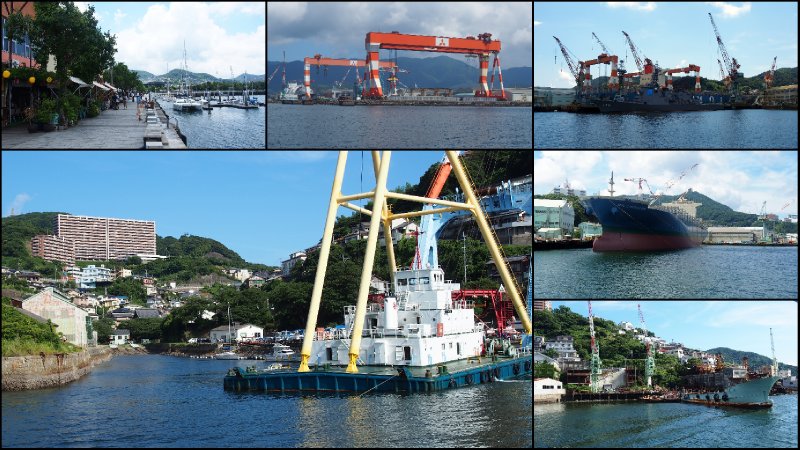 Now, firstly I think I should maybe manage your expectations a little bit. As much as I would have loved to make a daring landing on the island with a small fishing boat and really explored the decaying heart of Gunkanjima (as some people do), I'm afraid that I'm limited to doing the tourist approved tour, which is ok - I will at least get to see Gunkanjima with my own eyes and Haru is happy to come along as well when there is an official boat with a freindly captain, so we can go together. 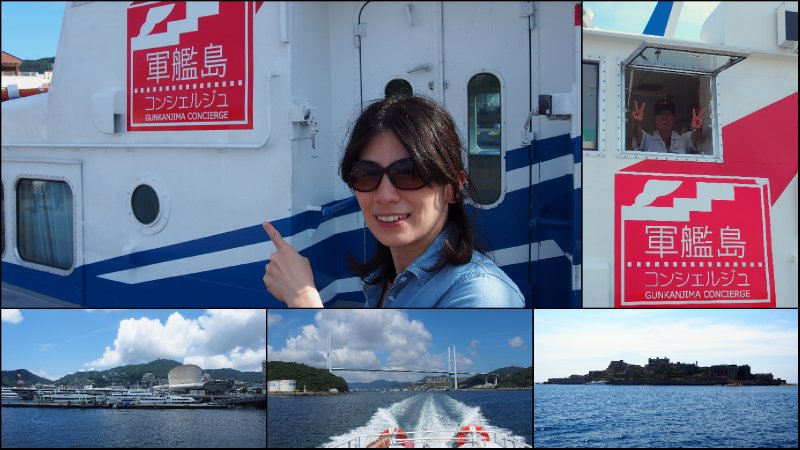 Mitsubishi bought the island in 1890 with a view to using it as a base for mining undersea coal reserves. This island was populated from 1887 to 1974 when my birth herelded the closure of the mine (Please note, no connection between my birth in 1974 and the closure of the mine can be lagally supported, it was probably much more likely due to a shift away from coal towards petrolium as a major fuel source).

Since then the island has been abandoned and left, uninhabited and at the mercy of the elements, to fall into disrepair.

As the boat draws closer the island presents itself as a dramatic silhouette on the hoirizon. My first impression is that it looks like an environment designed for a video game like Tomb Raider or Uncharted; that is a very good thing in my book.

Even the name Gunkanjima (Battleship island) is highly evocative, but (as you can see below) that's just what it looks like from the right angle; a huge concrete battleship riding the waves. Seen from the air though you can see just how compact the island actually is, there isn't any part of the surface that wasn't covered in concrete or any edge that wasn't walled to protect it from the churning sea.

Along with the exclusion zone around Chernobyl this is one of the few places where you can see on a larger scale what happens when man walks away from what he built, and nature if left to run it's course. As such it is a somewhat unique place that captures the imagination, and has appeared in several documenteries (Such as 'Life after people') and numerous art exhibits, photo books and unofficial blogs. Recently the island was the inspiration for the abandoned Chinese island hideout of the villain in 'Skyfall'; a few external shots of the real island were used to establish the location, but all the 'on the island' scenes were filmed in a studio.

However, those unofficial blogs created by tenacious Urban explorers are some of the best sources to get an idea of what it's like at the heart of Gunkanjima. One of the best (that I stole from, a little, for the collage below) is the post by Gakuranman which is well worth checking out; though there are other good ones if you search.

(The photos in the collage below are from various sources, just to show things I personally couldn't get a picture of) 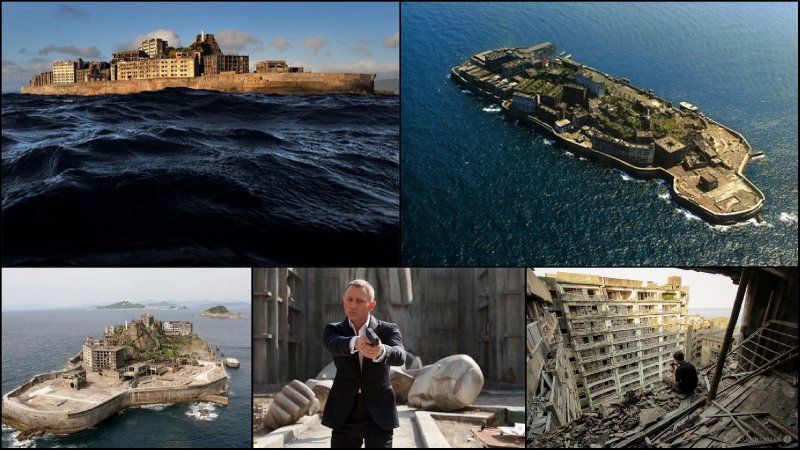 OK from here on the photos are all mine, I promise! So first let's give you a quick tour around the perimeter of the island. If you headed right around the northern tip of the island, before looping back to the official landing site this is pretty much what you'd see.

Most of the buildings here are the workers housing, incredibly at the height of it's productivity as a mine Gunkanjima was the most densely populated place on earth with 5,259 people in just 6.3-hectare (16-acre). So many people packed into such a small area. Unfortunately these areas, although perhaps the most interesting, are considered highly dangerous due to the deterioration of the building materials, and are still firmly closed to casual visitors.

The northern most tip.

Going around the back.

The far side of the island.

So, having established what you can't see as a regular tourist, lets take a closer look at what you can.

The official landing site covers the south east portion of the island, with 3 designated viewing areas linked by a paved walkway. This is more the 'business area' of the island meaning you get a much clearer view of the mining ruins here.

The first viewing area looks north towards the workers quarters, and is lined with a series of concrete arches similar to those I've seen at other mine ruin sites. What, I think, was the main administration building stands at the highest point, bringing a very literal interpretation to the idea of overseeing your workers.

Our guide, who used to live on the island as a child, said that even in the last couple of months that the view had changed and one or two structures had collapsed during recent bad weather. Gunkanjima exists at the whim of time and tide, and day by day it is disappearing. 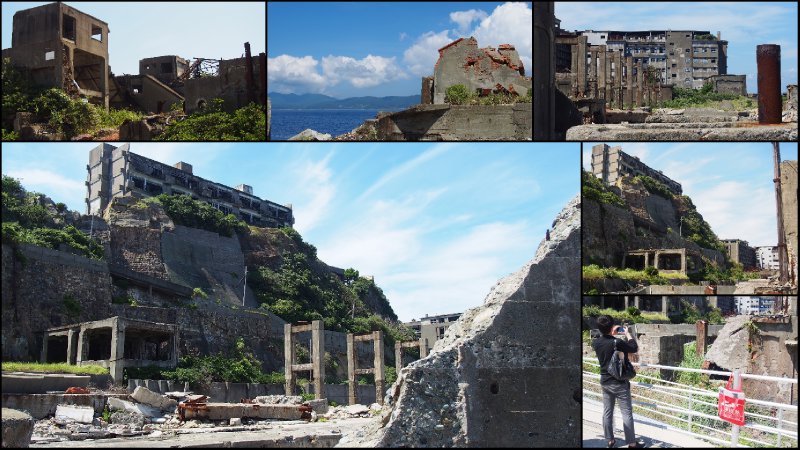 The second stage is right next to what used to be the exit from the mine. That small two storey building with half a flight of stairs hanging down into nothing; that is where the miners would once have emerged from at the end of their shifts. From there their next stop would have been the workers baths, large communal baths which used heated sea water for bathing as fresh water was a valuable commodity on the island. The water of the baths would be dyed black a mere moment after the miners climbed in our guide recalls. 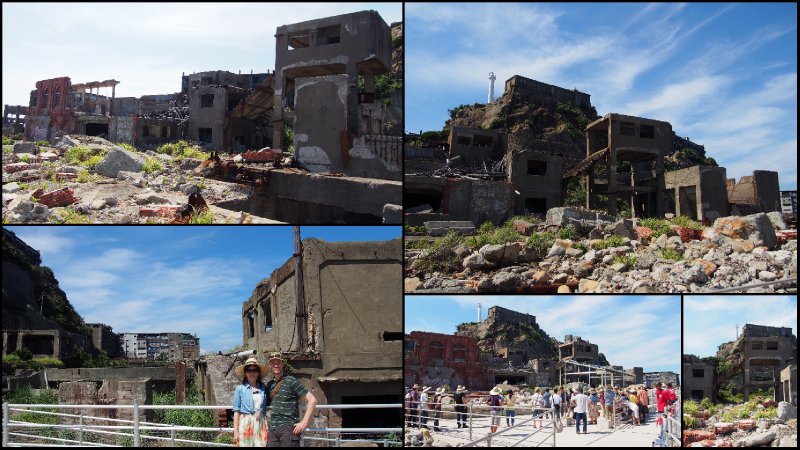 The third and final area is on the southern most tip of the island and is as close as we can get to the concrete skeletons of the apartment blocks. Although not typical for Japan at the time, concrete was used to make buildings able to withstand the typhoons that would often batter the community. One 9 storey apartment building was Japan's first large concrete building.

Nowadays the absence of people and access to good fishing waters make it a great nesting site for Black Kites, several of which could be seen wheeling in the blue overhead. Repurposing at it's best. 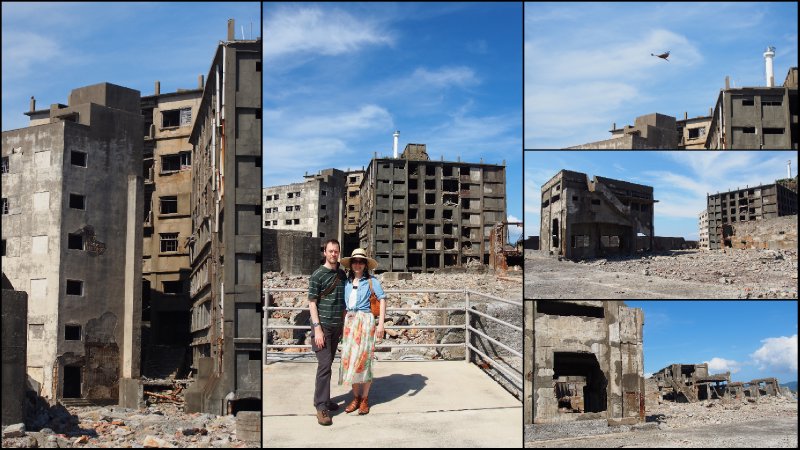 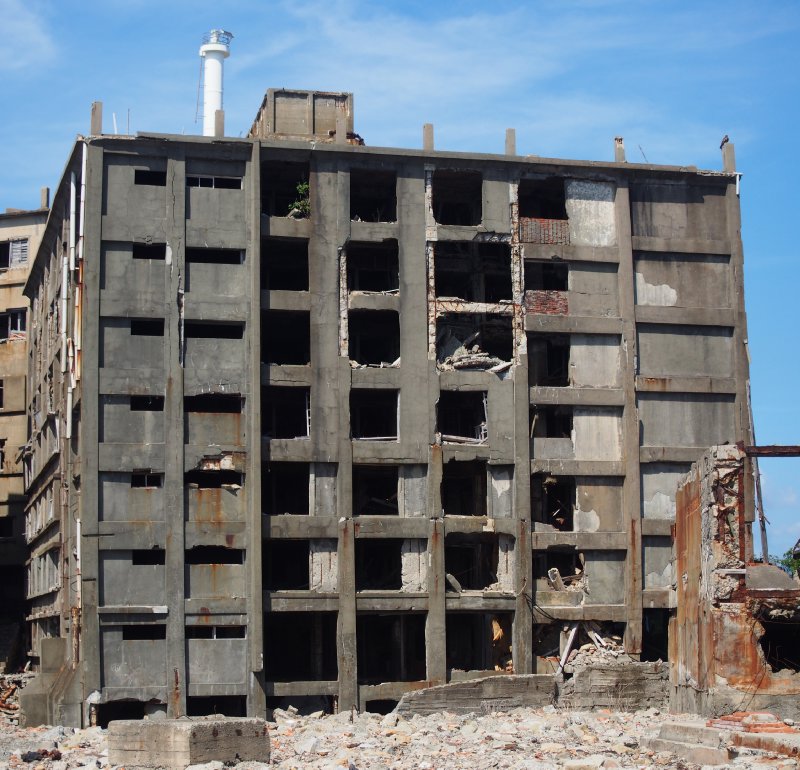 Then the tour is over and it's time to retrace our steps back to the pier, but it feels too soon. There is so much here to see, even if I am seperated from it by white safety bars and a no man's land that I'd be easily spotted on if I tried to dash across it. No choice but to get back on the boat as scheduled.

As the boat pulls away I'm still snapping pictures as the islands shrinks away, I can't help but feel I've been there but I haven't really done that so to speak. 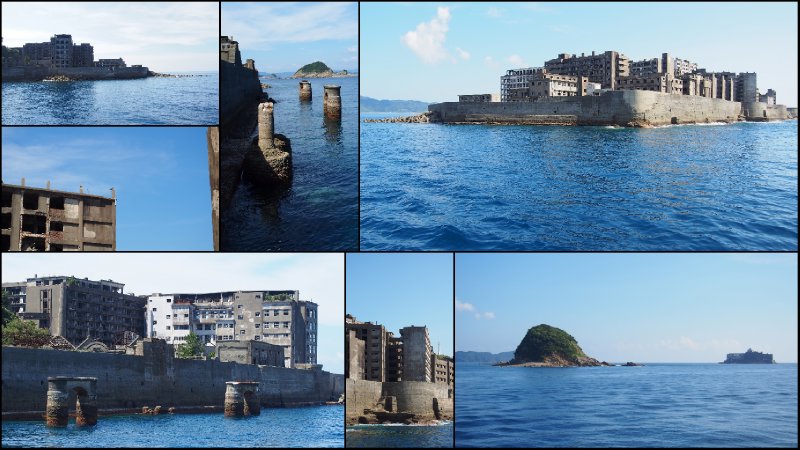 Overall I really enjoyed my time on Gunkanjima, though I was left with twinges of regret, and a stong desire to really walk the ruins and explore the forbidden depths.

However, if it came down to a choice between either never setting foot on the island or only going on an official tour.... Well, then I'm glad I got to go there, and that Haru came and enjoyed it too is a bonus; she'd never have gone without the seal of official approval on the tour.

That night, after a rest stop back at the hotel, we took a drive up a long, winding hillside road to a famous view spot over looking modern day Nagasaki. And there it was, the city humming with light and energy, Nagasaki as it is. What is that though?

Well what I've seen and learnt over the last couple of days tells me that it's a place poised somewhere between it's history and the ruins it will one day become. In that sense it's where we all are, it's what we all are; and while we should never forget all the turmoil that brought us to this place or the fact that time moves on, and that change is the only promise the future keeps... sometimes it's just best to be in the present and enjoy the view. 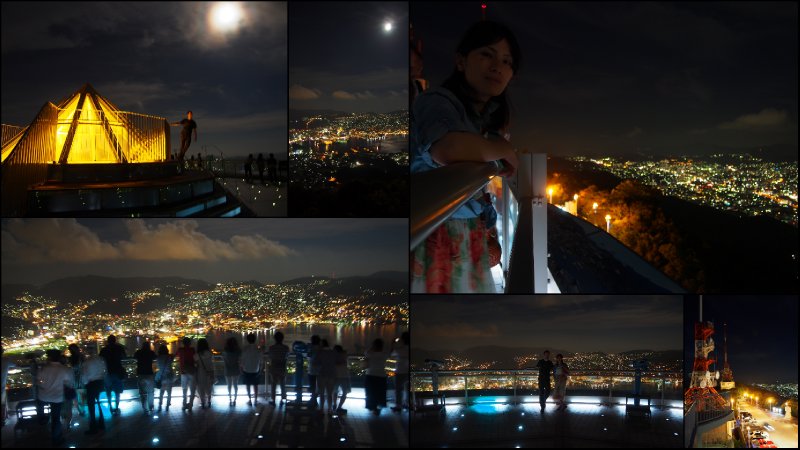