Kyuushuu Part 3 - To Hell and Back

We will finally be venturing beyond Nagasaki for the final stretch of our trip to Kyuushuu, but before that we are doing one last sightseeing round up of historical spots that we haven't visited yet. This means once again we're going to see how much the west infulenced this city, be it in small or in devestating ways.

Another architectural legacy of the past are the 11 bridges that span the river, whereas most historical bridges in Japan are wooden arches painted red, here the bridges are made of stone in the European style. The most famous of these bridges is known as the spectacle bridge, because of the way the arches and their reflection on the water form two perfect lens like circles. 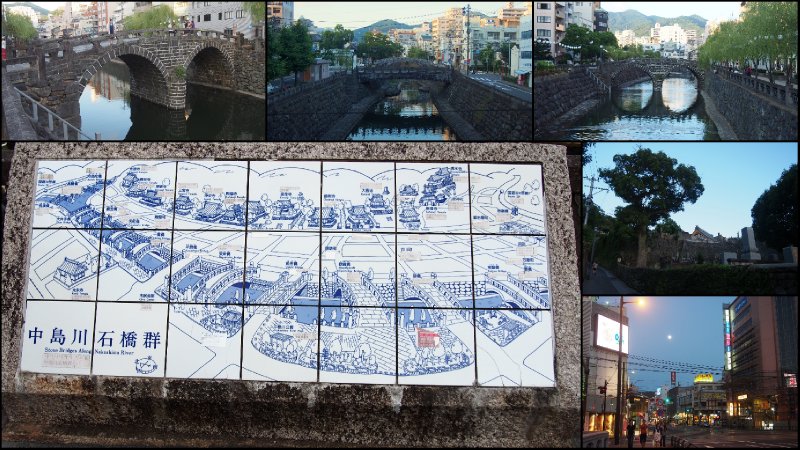 The next thing I wanted to see was the monument to the 26 martyrs of Nagasaki. Having been made aware, during our first day in Nagasaki, of the stomy and violent history of Christianity in Japan I was curious about this site. On February 5th, 1597, 26 European missionaries and Japanese converts were cruxified on this hill top, making them the first (but not the last) Christian martyrs in Japan.

Although these first martyrs became especially revered, to the point of being cannonized, there were other cases over the years. In fact the largest mass execution of Christians in Japan wasn't to occur for another 35 years, when 55 executions took place in the Great Genna Martyrdom of 1632; again in Nagasaki. 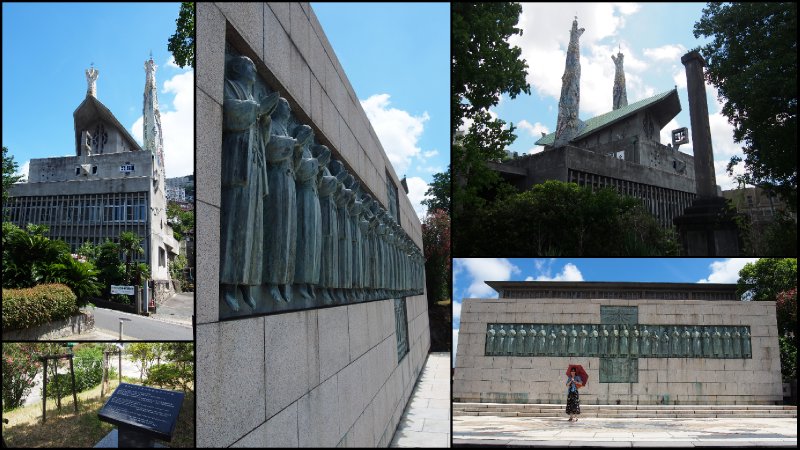 Unfortunately, this is still a long way off being Nagasaki's darkest day. That day would have to be August 9, 1945 when the atomic bomb, codenamed 'Fatman', was dropped on the city. The death toll from that single bomb totalled an estimated 73,884, including 2,000 Korean forced workers and eight POWs. Another 74,909 were injured, and several hundred thousand more were left dying due to radioactive fallout or the various diseases that soon followed.

This series of rings in a quite corner of a leafy park shows the epicentre of the blast, though the bomb actually detonated 500m up in the air. The last remaining intact piece of the original Urakami Cathedral (which stood 500m from the epicentre, and was otherwise totally destroyed in the blast) has been moved to stand close by as a reminder of the destruction. 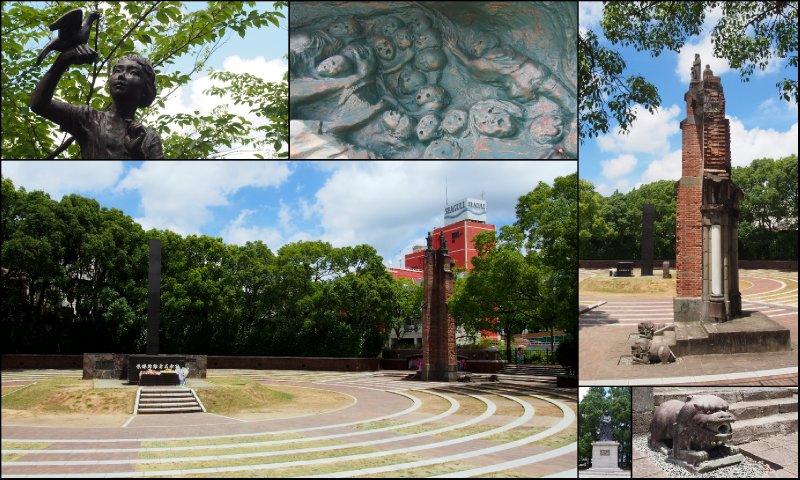 The park is now refered to as the 'Peace park' and an annual memorial ceremony is held here on the anniversary of the bombing. The park also houses 15 statues, expressing ideas about the theme of peace, donated to the Nagasaki by artists from around the world. 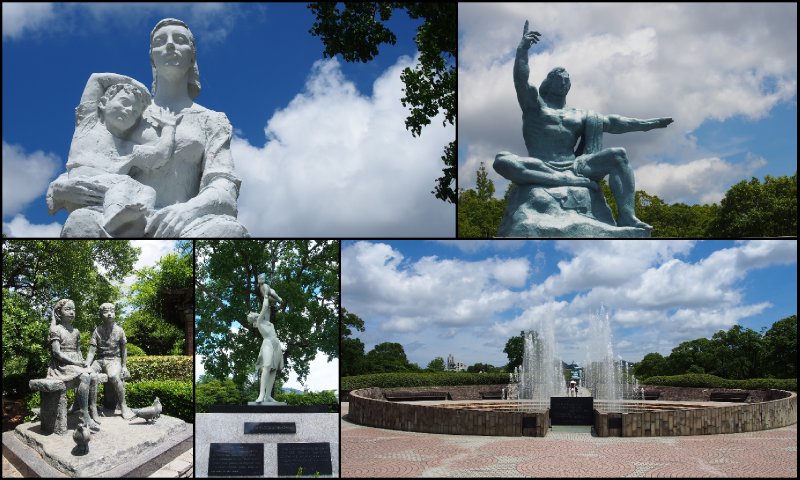 It's impossible to say that one part of this planet has more history than any other part, we are walking on bones of those who came before almost anywhere we tread these days. Often it's just a question of what is forgotten and what is remembered, what is torn down and built over and what is left to stand. Nagasaki is a city where history has left scars. Scars that tell a story that spans hundreds of years. Nagasaki is a city that remembers not just because it hasn't forgotten yet, but because things happened here that shouldn't be forgotten.

It's time for me to leave Nagasaki now, and while I may not have left my mark on the city it has left its mark on me. I too shall remember.

However, we still have a little time left in Kyuushuu. Enought time to go to hell and back, so we're hitting the road and heading east for a spot of volcanic R&R.

Of course all of Japan is the product of underwater volcanic activity, even Mt Fuji is actually an active volcano that hasn't erupted for a long time. Almost anywhere in Japan you can find onsen, bathhouses based around natural hot springs that are also a result of the geothermal activity going on in the hidden depths. Some areas of Kyuushuu are a little more transparently volcanic than most of Japan is though, one such area is called Unzen Jigoku and that's where we are heading now.

On the way we pass plenty of onsen venting clouds of steam into the air. We also pass the longest free foot spa in Japan, where we take a short break and a relaxing foot soak with a sea view. 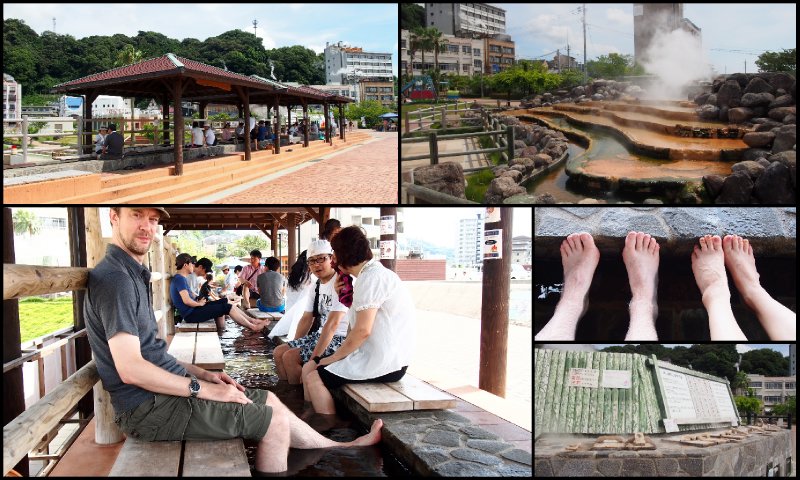 Unzen Jigoku itself is a little further on, and we'll be spending the night in a big ryokan style hotel here. Jigoku actaully means hell in Japanese, and looking out from our room you can see why the area has that nick-name. The heat, and concentration of chemical elements being dragged up from below, have stripped some areas clean of all vegetation, leaving a blasted, blighted and billious (yet oddly beatutiful) landscape behind. 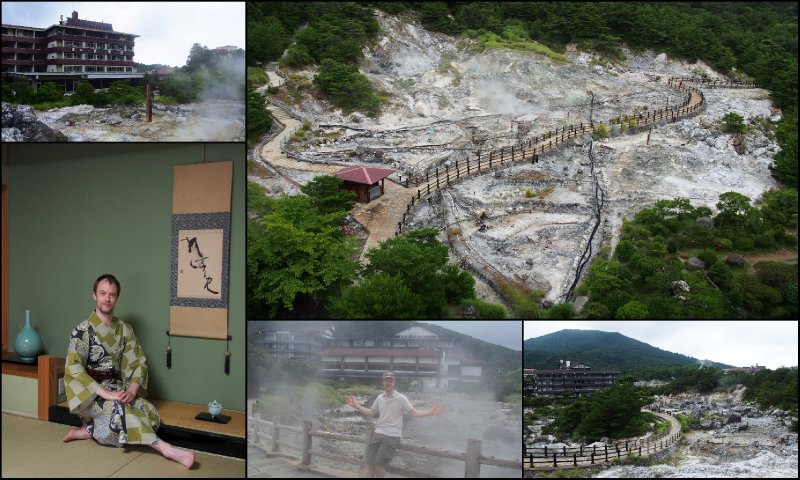 This is only the second time I've visited a volcanic area, but both times I've found it fascinating. Visually it may look quite bare at first, but there if you look closer there are some wonderful details that you couldn't see elsewhere - vivid chemical greens and yellows, roiling living mud, delicate crystal formations. 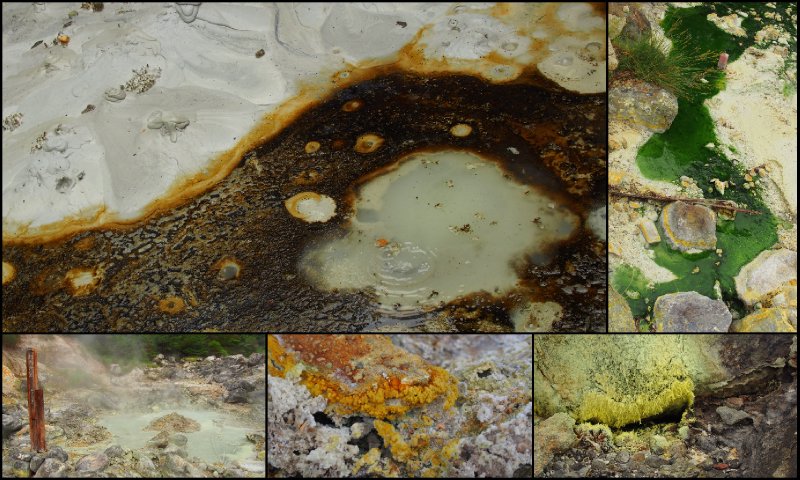 Beyond that there are also the sounds and smells. Steam can whistle, blow, gush and roar as it erupts from the ground, in places the air is heavy with the tang of eggy sulphur - you don't just smell it you can taste it (and, if you really want to, you can buy real hard boiled eggs cooked in the naturally boiling waters to snack on as you walk around). In short volcanic landscapes are visceral, they catch your eyes, your ears, your nose and even your taste buds. 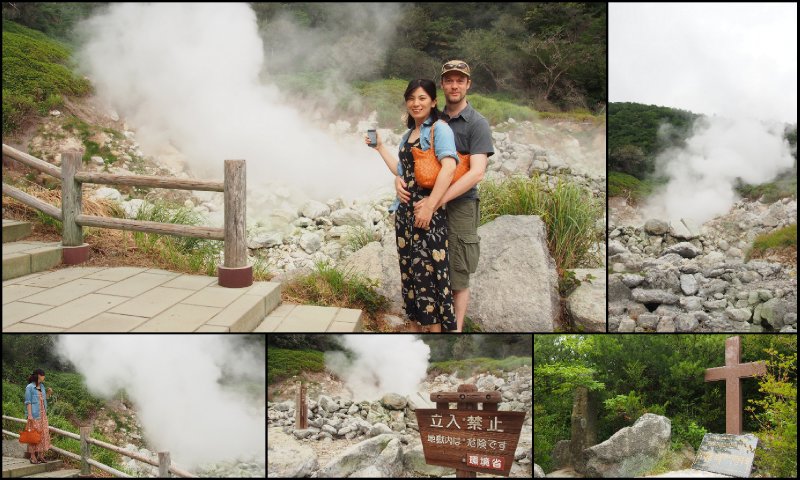 We did a full circuit of hell twice during our stay, we also discovered a small family run toy museum just down the road from the hotel which we visited on the second day. The term museum is a broad umbrella, covering everything from huge national instututions to ramshackle collections of junk thrown on display by their loving owners. This was definately much more at the ramshackle end of the spectrum, but I have no problem with that. This was an true Alladin's cave of retro plastic, tin and rubber. Enough to make me nostalgic for a childhood I might have had (if I'd been born in Japan) 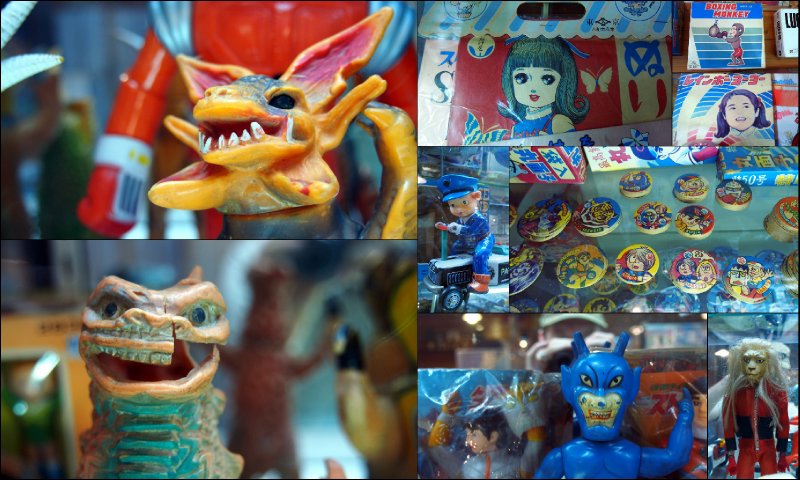 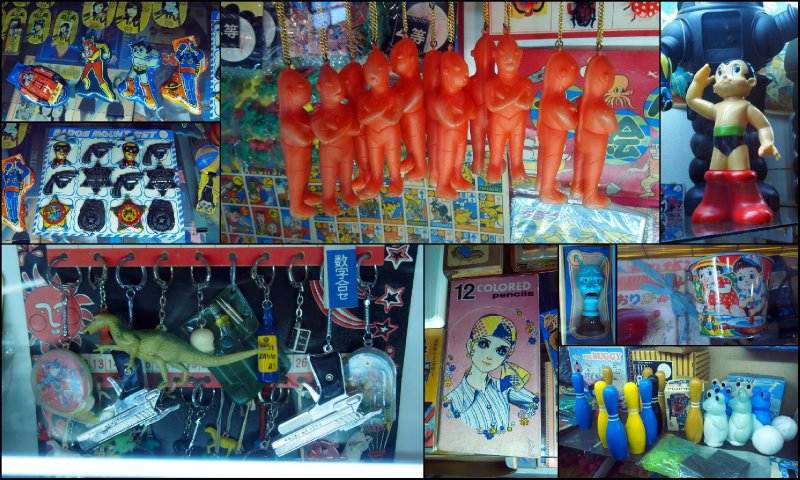 Of course there was a real grockle-trap of a shop attatched as well, with a mix of original and retro style toys and sweets on sale. We filled a bag with pick and mix, and bought some cute animal themed paper lantern decorations which are now hanging in our living room. 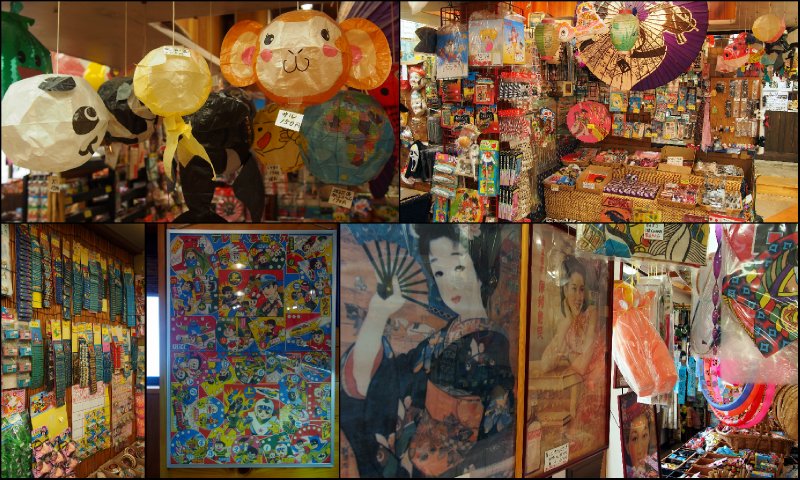 Our time in Kyuushuu was fast drawing to a close now, it was time to drive back to Nagasaki, return the rental car and fly home. Still we had time for one more stop on the way back - at the Penguinarium!

Yes, I probably just made that word up, but that's what it was an aquarium with a collection that was 90% penguins. So that's what we'll close with today; Africans, Adelies, Kings, Emperors, Humbolts and Rockhoppers - a right proper pack of penguins (and not a chocolate biscuit in sight). 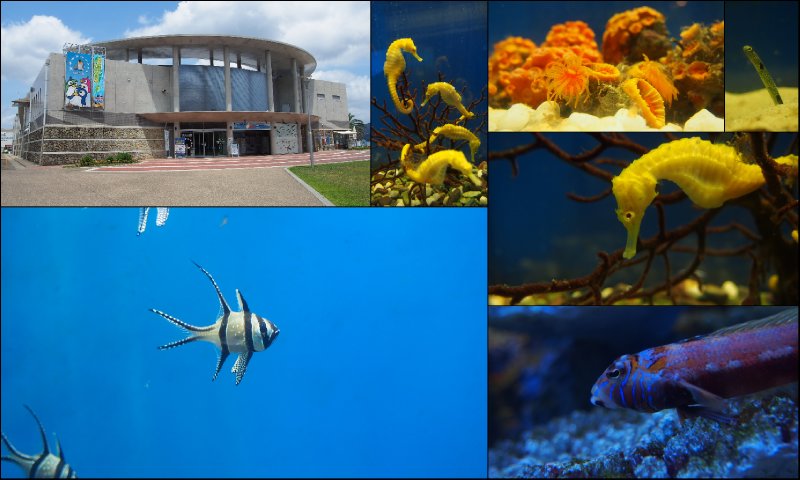 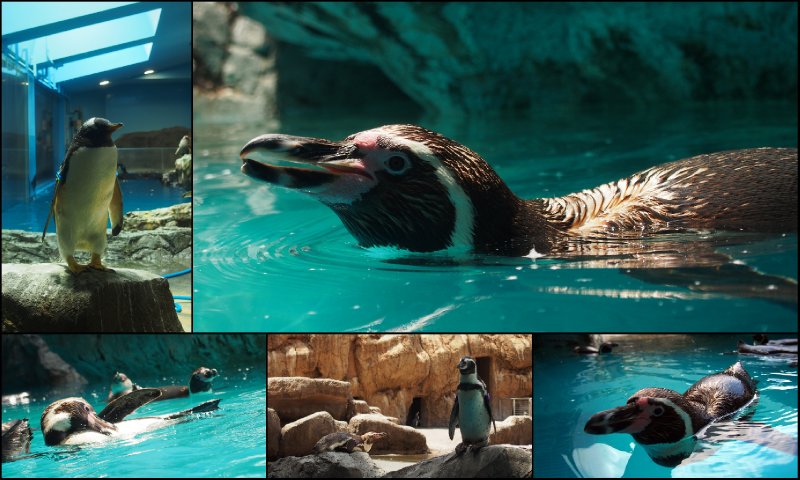 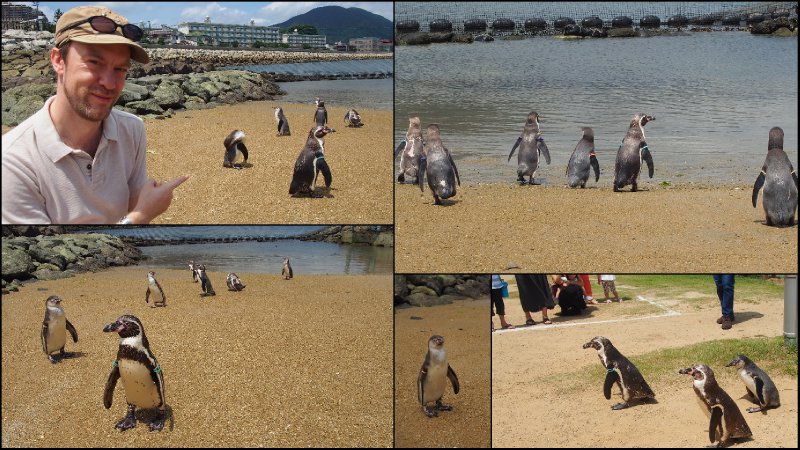 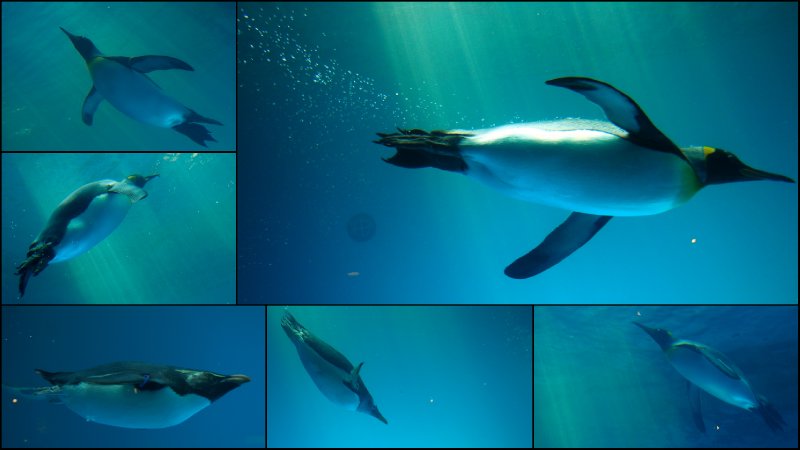