Head north from where I live in Imazu you pass through Makino (which constitutes the final stretch of Takashima City) and quite soon you pass out of Shiga and over the border into Fukui. It's really close, and we have taken this route to drive up to Tsuruga several times.

Turn off the main road a little and you can find Uriwari no Taki. A nice peaceful, spot with traditional shrines built around the splashing streams coming down from the mountains. It's even closer than Tsuruga, so quite why I've never been there before is a bit of a mystery. Still it's always nice to find a (not so) hidden gem close to home.

The waterfalls are not the the dramatic, vertical plunge and smashing onto rocks type. They are more the gentle tumbling kind, cascading down the hillside and feeding the moss that grows all around. 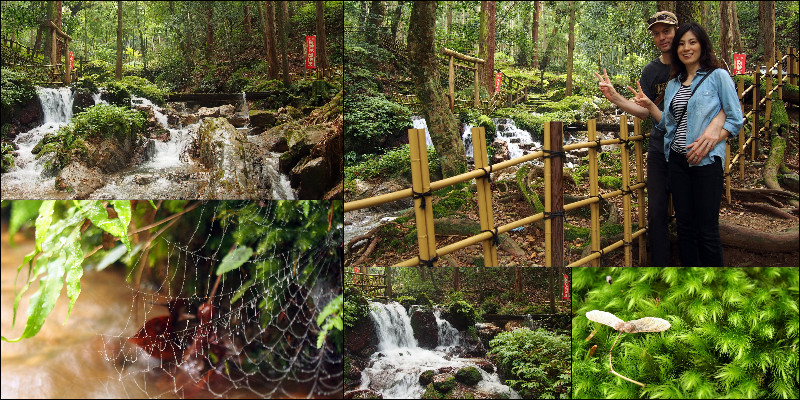 As for the shrines they are spread out and worked into the landscape in a rather non-intrusive and pleasent manner. As you walk around you'll find various familiar elements such as red bibbed icons, enshrinement halls and a koi pond all embedded in the surrounding greenery. 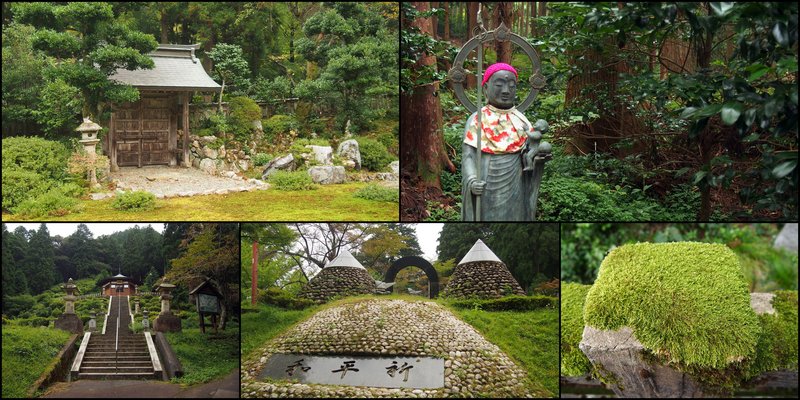 Some of the icons have already been worn smooth, and have themselves become part of the green as the creeping moss reclaims them. 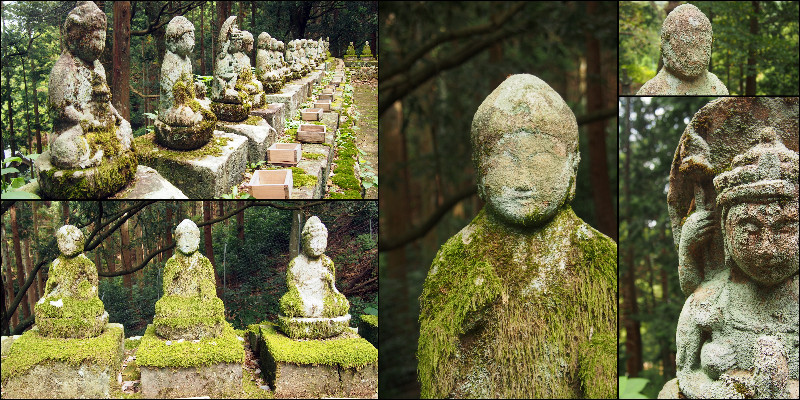 As impressive as grand stone catherderals in urban centres can be, there is something about quietly crumbling wooden shrines towered over by massive ancient trees that speaks much more of the divine to me. I guess the former tells us that we are beneath something greater than us, the latter tells us that we are part of something that includes us. At least that's what it seems to say to me. 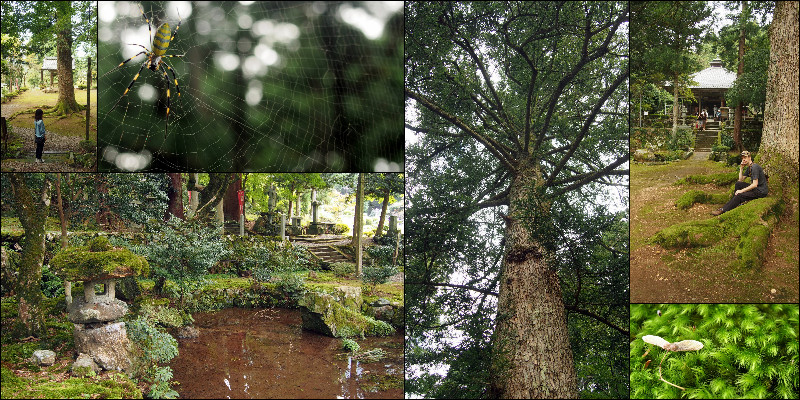 Set back off the main road as it stands now, Uriwari no Taki would be quite easy to miss (as we evidently did several times). However, back in the day it would have been situated directly on a very important route - one of the so called Saba-kaido or Mackerel routes.

These were the ways along which fresh fish were carried from the port town of Wakasa to the (then) capital in Kyoto. The same routes would also have been used for carrying post, and some of the key places along these old routes still remain today set back from the modern road.

One such place, not far from Uriwari no Taki, is the old postal town of Kumagawa-Juku. 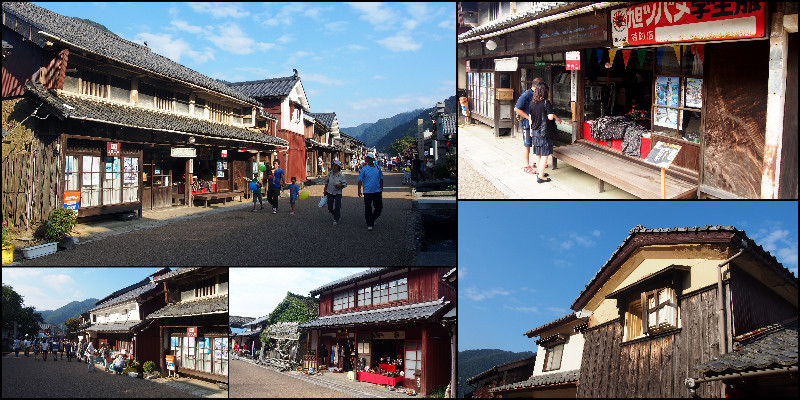 Like many such places, the village is long and narrow. There are almost no buildings that don't front directly onto the road to better atttract those walking the Saba-kaido as they passed. Even now the way is lined with traditional Edo style merchant houses that offer up tantalising fragments of the past. Outside - carvings that would have served to denote certain families or businesses now lie propped again walls while kettles and vegetables cool in the fast flowing stream. Inside - glimpsed steep wooden stairs and tatami rooms with traditional hearths are visible as as you pass by. 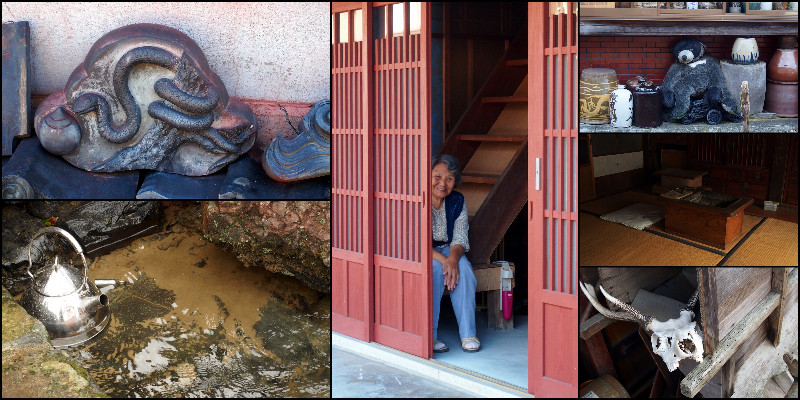 On the day that we visit there is even a festival taking place, bringing the normally sleepy village to life. Craftsmen were actually sitting in some of the shop fronts whittling away to make crafts and toys, such as bamboo waterguns for the kids to play with. Local ladies were out making hand-made oni-giri (rice balls) for visitors, other vendors were selling sweets and music was playing.

One quite rare sight was a Fuke-shu monk playing a wooden flute (or shakuhachi). Fuke Shu is a sect of buddhism which used the flute music as a substitution for the more traditional sutras and texts as a means to reach enlightenment. In Fuke Shu the idea of pilgrimage was very important and the image of the wandering flute playing monk, wearing his strange basket like headgear, is perhaps the most typical associated with the sect. The story goes that the Bakufu govenment in power at the time gave Fuke-shu monks the freedom of the country, able to travel wherever they pleased regardless of the normal checkpoints and regulations.

This may seem like a wonderful act of religious tollerance, but in reality with their hidden faces and ease of movement many Fuke-shu monks were actually govenment spies. When the Bakufu government fell, the fuke-shu sect fell with it and for a while it's practice was actaully banned though it has survived and is still practiced by a small number of people to this day. 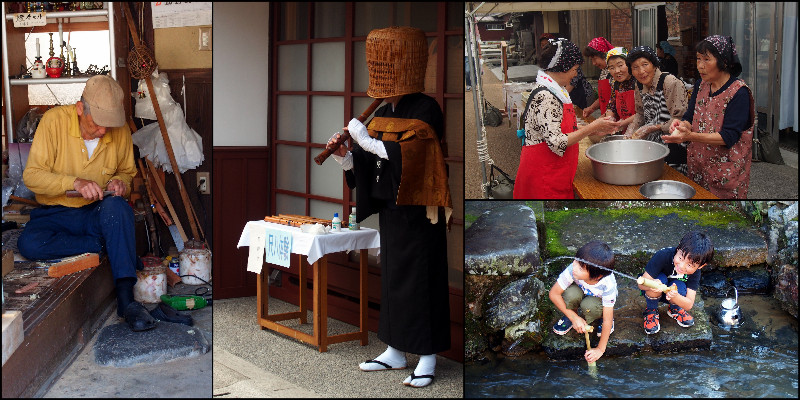 Now, todays entry may have been generally a celerbration of traditional Japan, its history and culture and how it has survived and still exists today. However, this wouldn't be modern Japan without a bit of quirkiness. So of course in addition to the traditional we also got a a slice of modern odd. So I'll leave you today with some local mascots on parade, and monkey pulling a rickshaw - of course. 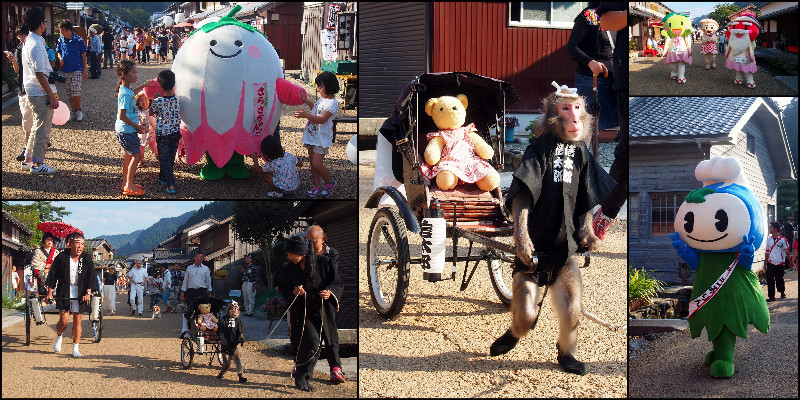