Today is the third and final part of my trip to Ishigakijima, and we're actually staying on Ishigakijima this time. First off we'll be spending a bit of time at a park that's decicated to preserving Okinawa's cultural heritage. A goal which they achieve in part by relocating traditional buildings to within the parks confines.

There are several such buildings including a fisherman's hut, traditional residences and a wealthy family's house. All of them are fitted out appropriately and are open for you to wander around. Staff members, in traditaioanl garb, also encourage you to get hands on with props provided in some of the houses and to get into the island groove. 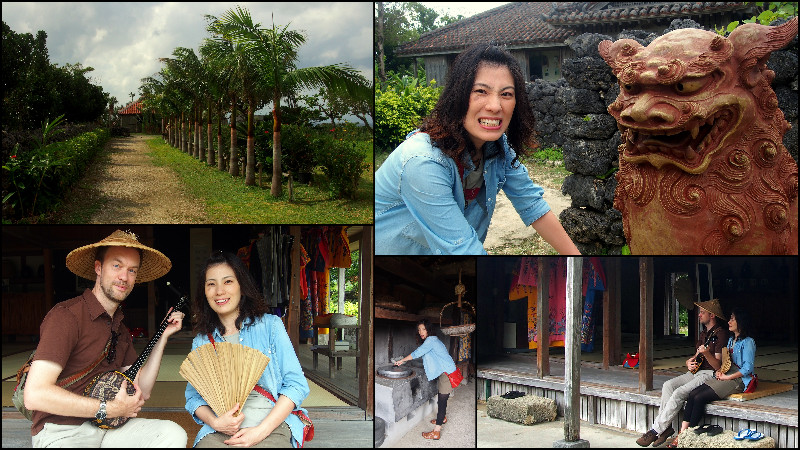 There are also performances of Okinawan music and dance at various times throughout the day. Though I'm not an expert in Japanese folk music styles by any measure, I can recognise Okinawan music as opposed to other traditional styles. It tends to have a quite upbeat rhythme and a includes chanted elements that are quite interesting. They also have their own unique string instruments that give a distinctly twangy sound to the music. 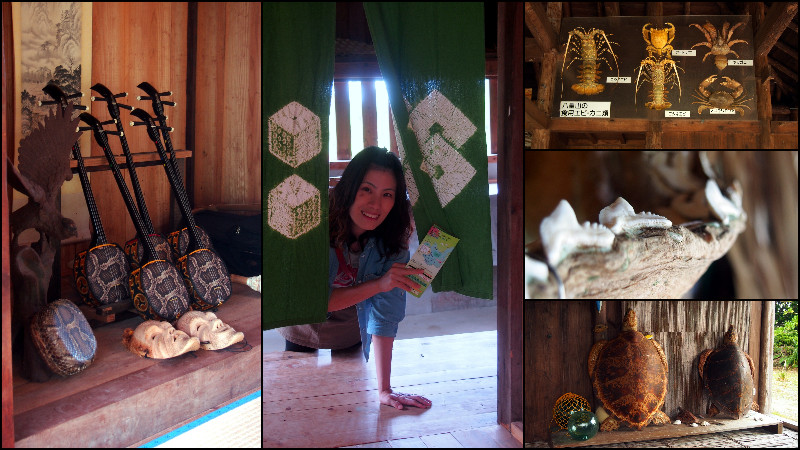 Walking around though it was often the more natural elements of the park that caught my eye. plants and flowers, lines, curves and spirals; the geometry of nature. 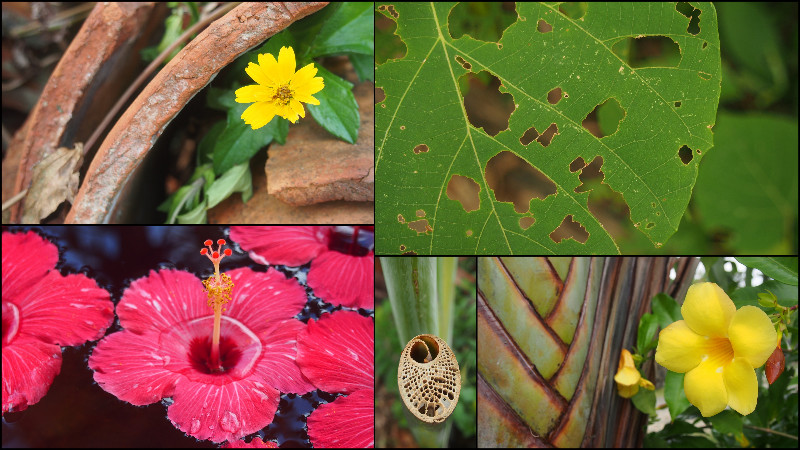 My favorite area by far though was the monkey walk, where you could get up close and personal witha gang of squirrel monkeys. They are so cute, it's a real pleasure to watch them chilling out or playing in the trees. 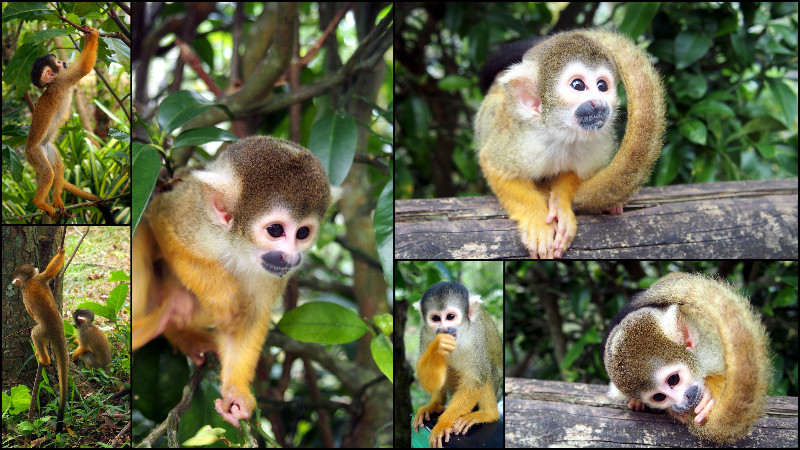 Things get really interesting though if you invest a couple of hundred yen in a plastic ball full of food pellets. Then they come out of the trees and climb your trouser leg in a jiffy, or just jump straight onto your shoulder for the more direct approach. Being clambered over by squirrel monkeys is actaually a nice sensation in my opnion, so I really enjoyed that. 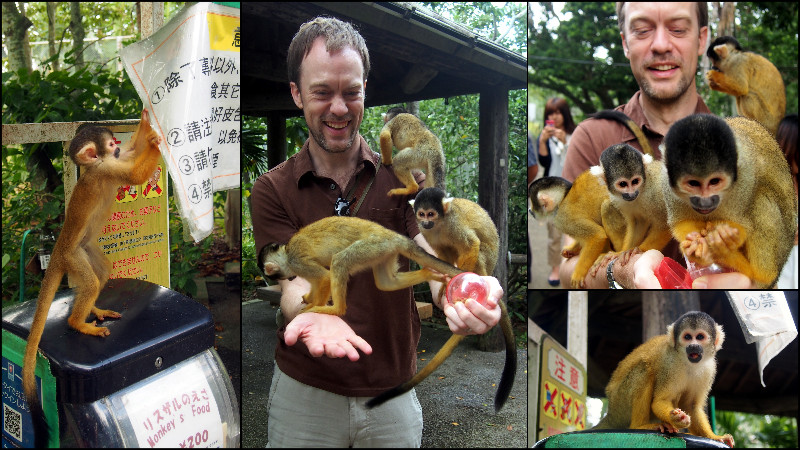 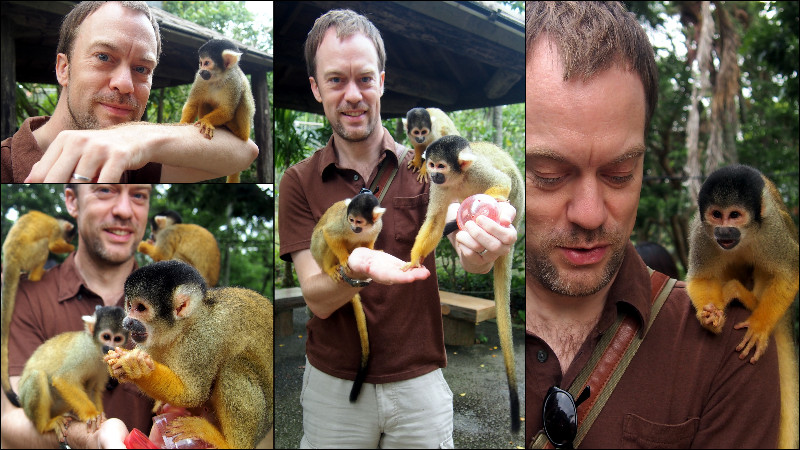 After spending too much money on monkey food (Heck it was worth it), we walked down to the mangrove walk area of the park via a winding forest path. 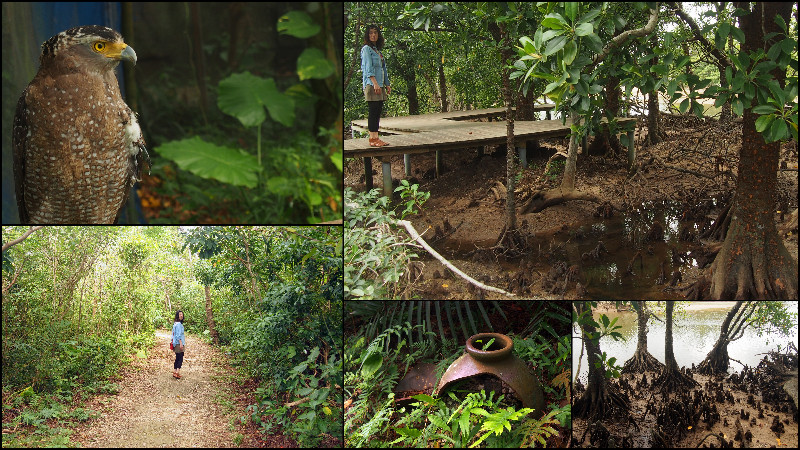 There I spent several minute laying flat on my stomach hanging my camera over the edge of the raised walkways taking pictures of ...
Well can you see what? Try and look. 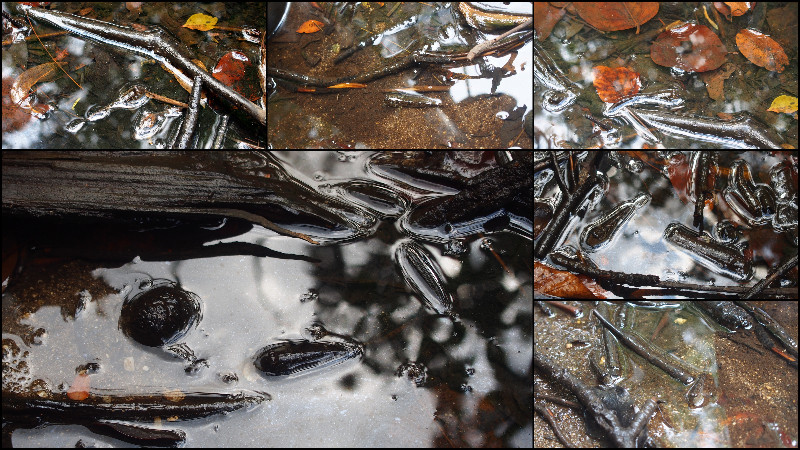 No? OK, here are some slightly more close-up pictures that are easier to see. 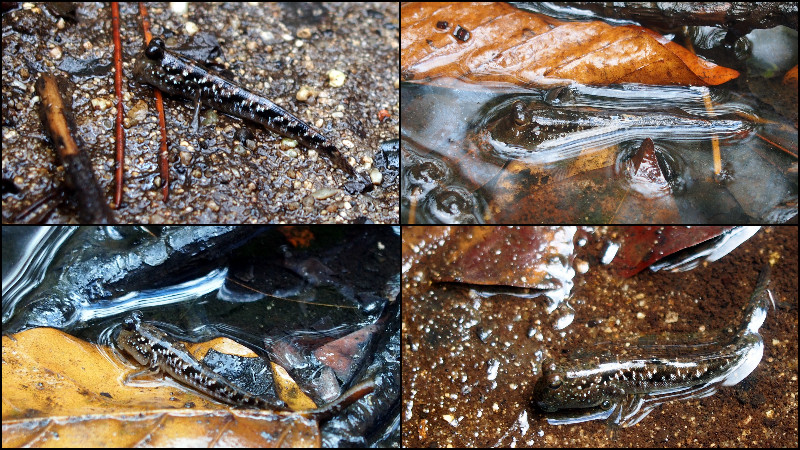 Mudskippers! For some reason I've always found mudskippers pretty interesting (probably as a result of my young brain being boggled by the idea of a creature whose defining feature is that it skips around in mud all day - I remember emulating them on a family holiday one year, by jumping around in the tidal mud flats, when the sea went out and getting pitch black from head to toe!). Anyway, this was the closest I've ever seen the real thing in nature so that was quite exciting for me too.

In the end we spent almost all morning wandering around this park and had a very nice time, the combination of cultural, historical and natural elements really made it for me. However, it was now time to start heading back towards the airport and to turn in the rental car. On the way thought we still had a couple of small stops to make.

Firstly, we made a brief stop at a road side ceramics workshop that produces some of the distinctive day-glo Shisa (and other creatures) that we've seen on sale in many of Okinawa's shops. There are some fantastic large scale examples of their work all around the workshop, and they are currently breaking ground behind the workshop to make a ceramics park - I'd be very interested to go back again in a couple of years time and see how that looks when it's open. 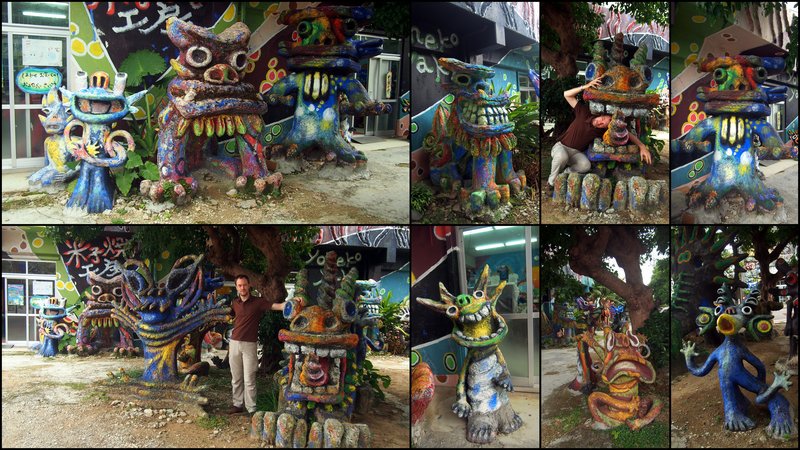 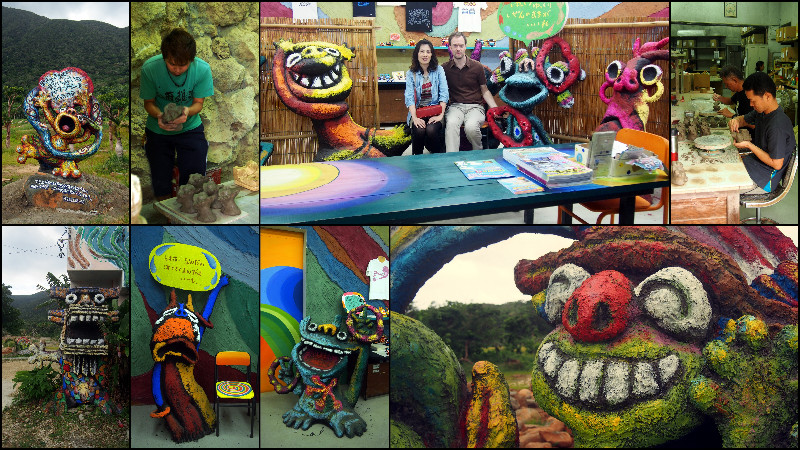 After that we just had one more destination, Haru wanted to go to a view spot she'd read about. So we hit the road for the last time, and pass more sugar cane fields, distant hills and plm tree lined roads until we arrive at the base of the hill. 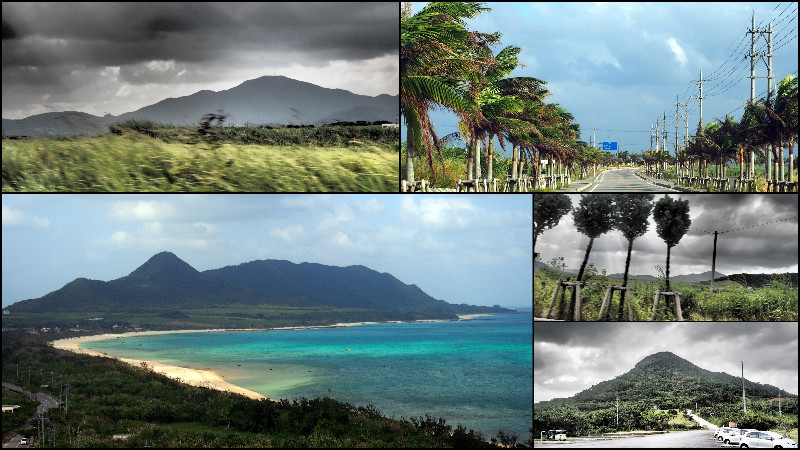 A short climb later and we're looking down on, the deep blue water of a bay on one side, and, the rolling hills and fields stretching down the coast on the other side. Okimawa certainly doesn't lack for scenic spots.

We make good time on the final stretch of the road and get back to Ishigaki city with a bit of time to spare, so we decide to have a last walk on the beach before we return the car.

The beaches near Ishigaki city aren't the beautiful, slender strips of sand we've been enjoying over the last few days, they are jagged, rocky and quite desolate affairs. Yet somehow it seems quite an appropriate place to bring the trip to an end, standing on a bare beach looking out over the sea wondering what comes next. 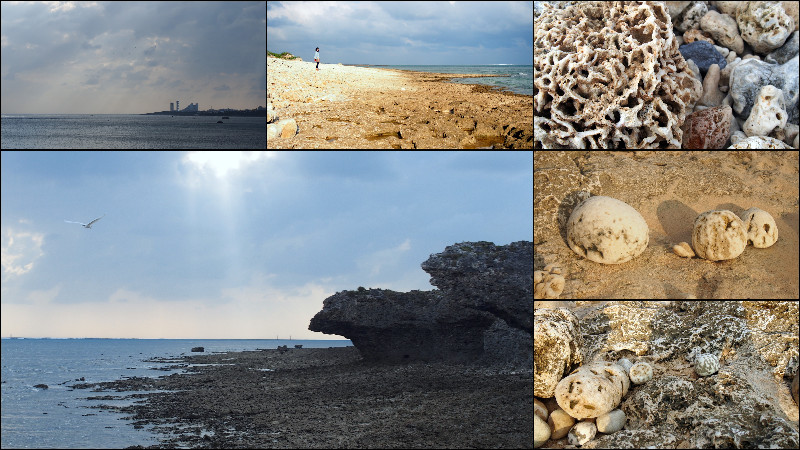 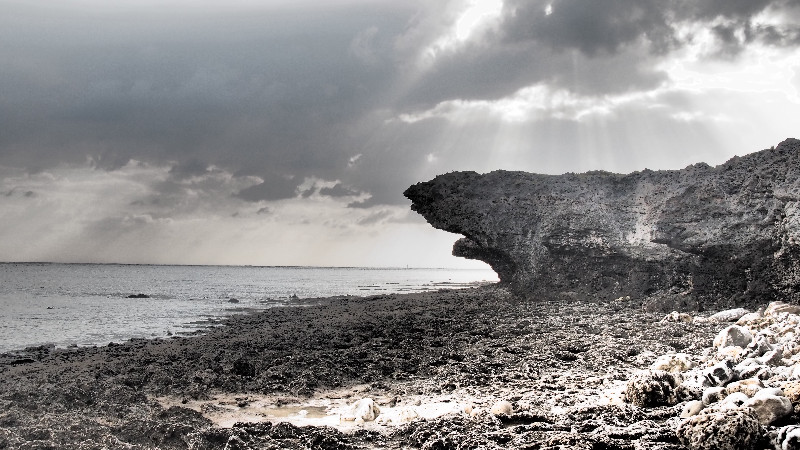 Wow, what beatiful sights! I have my heart set on going to Japan someday.

P.S.
The mudskippers are so funny!