For our final big road trip in Japan I really wanted to go and visit the small town of Matsue in Totori Prefecture, as it has a lot of connections with one of my favourite literary and cultural figures from Japanese history. Also, driving there would allow us to stop off at the famous Totori sand dunes!

So, these are the Totori dunes, the place where the Tatooine scenes in Star Wars would have been filmed if Star Wars has been a Japanese production. Sufficiently huge and dramatic enough to pass for a desert with a bit of creative shooting; as this photo I took of a couple of cos-play girls we spotted there proves. 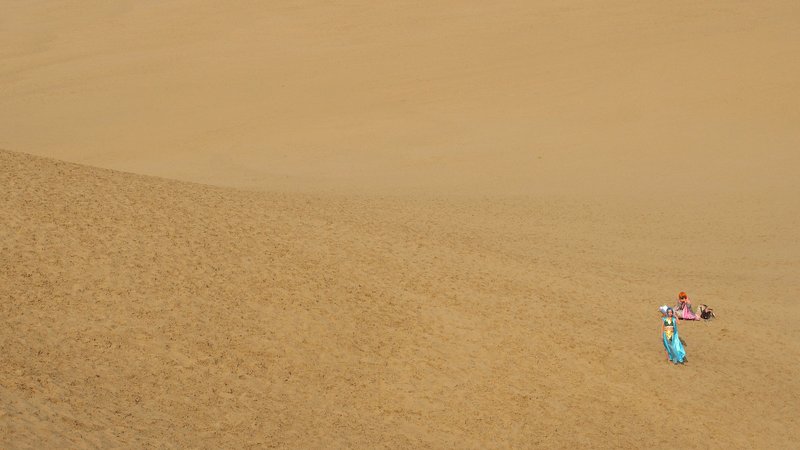 More than a mere beach, or even a standard coastal dune, here the sand has piled up to make hills high enough for sand boarding.

Climbing these rolling sandy slopes is both exhausting and rewarding, with great ocean views from the tops. 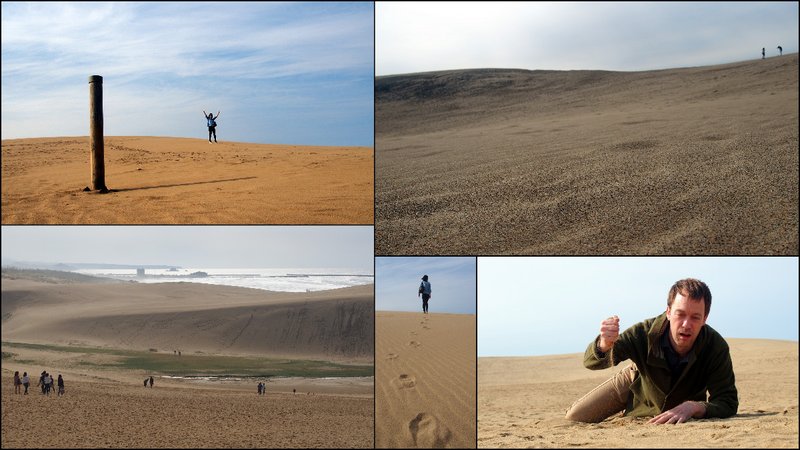 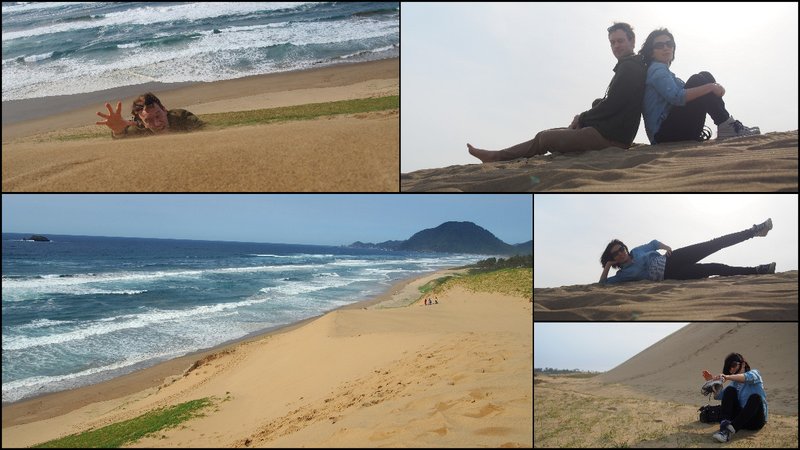 A word of warning though, as tempting as it might be to run down the steepest sand bank you can find, as fast as you can... those few seconds of wild, devil-may-care, free-wheeling bliss will have to be paid for with a slogging climb back to the top. 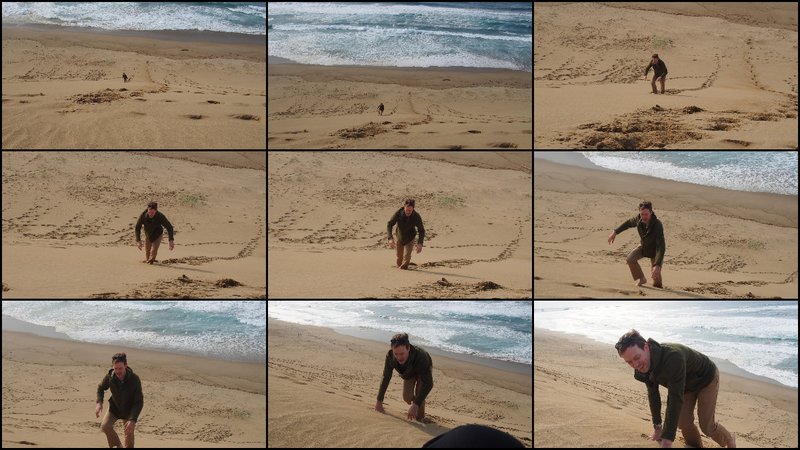 After a fun stop over at the dunes we kept driving south-west towards Matsue, chasing the setting sun as we went... 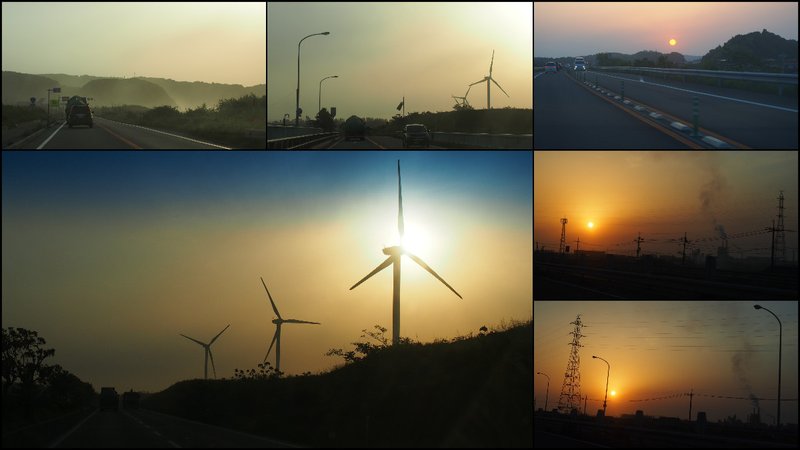 ... and the next morning we awoke in Matsue itself, a small town built around it's central castle, known as the Black Castle for very obvious reasons. Small, but perfectly formed, it's classic example of the type of castle dating back to Japan's feudal age (along with Hikone castle). 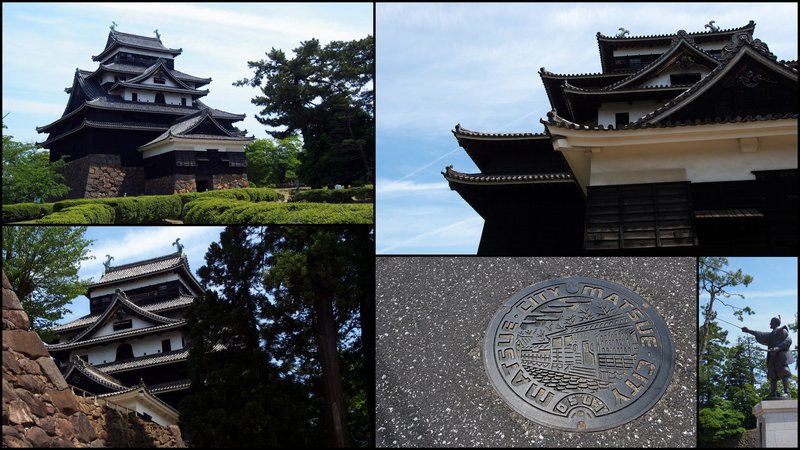 The small museum inside the castle is quite typical fare for this type of place, objects from feudal Japan including samurai armour and masks which I always enjoy seeing. As nice as these displays are they can become a little stilted and samey after seeing enough of them though, and I can't help but think it'd be nice to see a bit of this history brought to life a b it more. 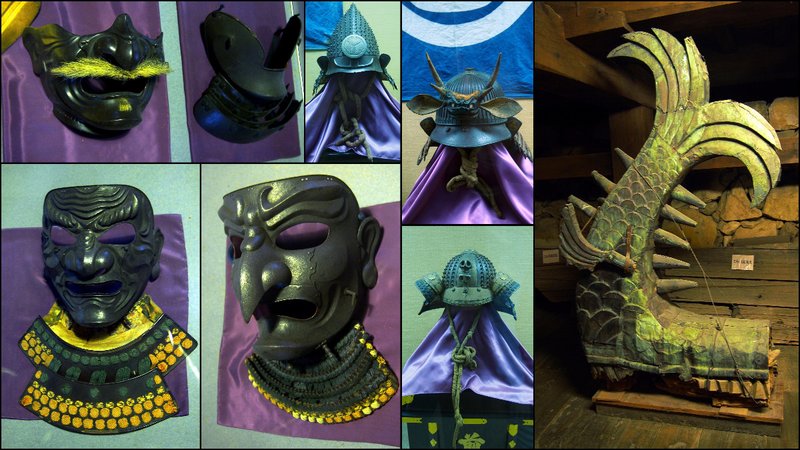 Luckily for us we've chosen a good day to be in Matsue for living and breathing history as the local museum is having a demonstration of matchlock firearms today. This type of gun was introduced by visiting Europeans in 1543 and went into mass production, becoming widely used in the late 16th century. These early rifles had to be reloaded with a fresh bullet and powder after every shot, making them quite slow to use in comparison with the rate of fire that a good archer could achieve. They did however have one big advantage, they could be used by relativity unskilled fighters meaning farmers and peasants cold be used to bolster the numbers of an army to great effect if needed. 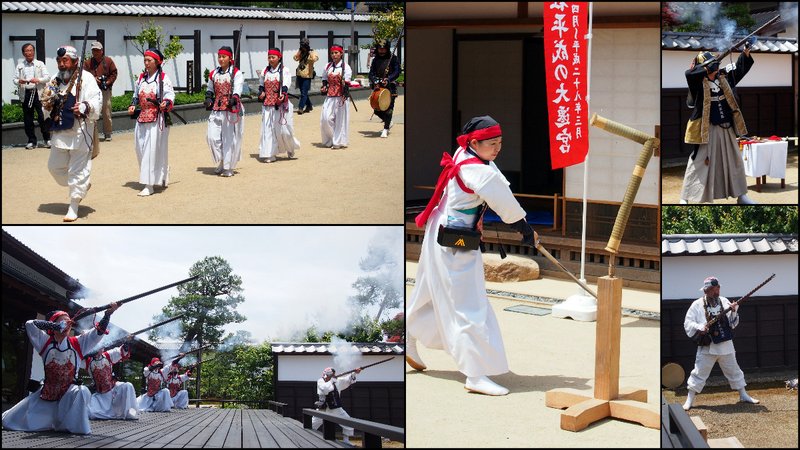 Today's display was performed by a mostly female team with great precision and timing, and despite only shooting five or six rifles at once the noise was deafening; what the 500 guns Oda Nobanaga had made all firing together must have sounded like is unimaginable. 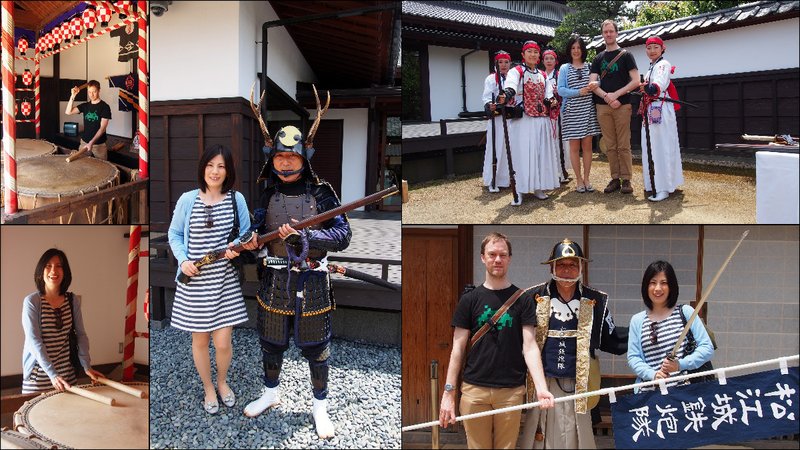 Overall Matsue is a fantastically well preserved slice of old Japan, in addition to the castle and the museum there are a number of well preserved traditional houses some of which are open; such as this Samurai house. 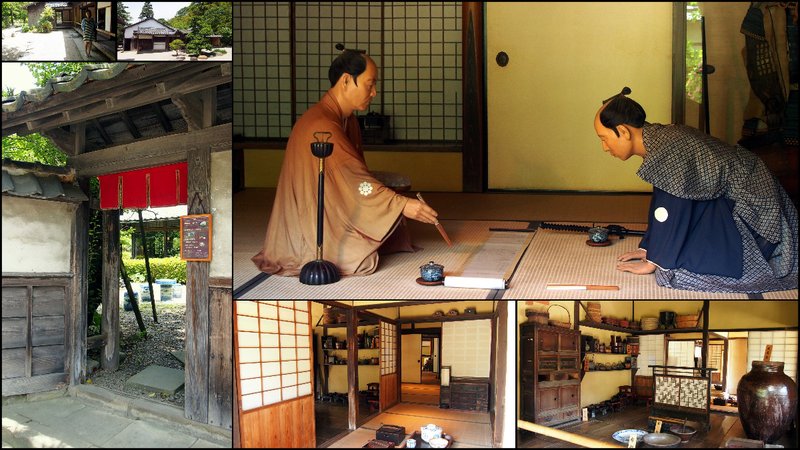 The house I really want to see though is old house of Lafcadio Hearn, the writer who was the first to really bring Japan to the popular imagination with his collections of classic ghost stories and essays on various aspects of Japanese life. This is actually the second of his old houses I've visited as I also saw his relocated summer house in the Meiji Mura museum

This house was the place where he wrote his 1892 essay 'In a Japanese Garden'. For me it was quite special to be able to sit where Hearn sat and look at the exact garden that helped inspire that essay. 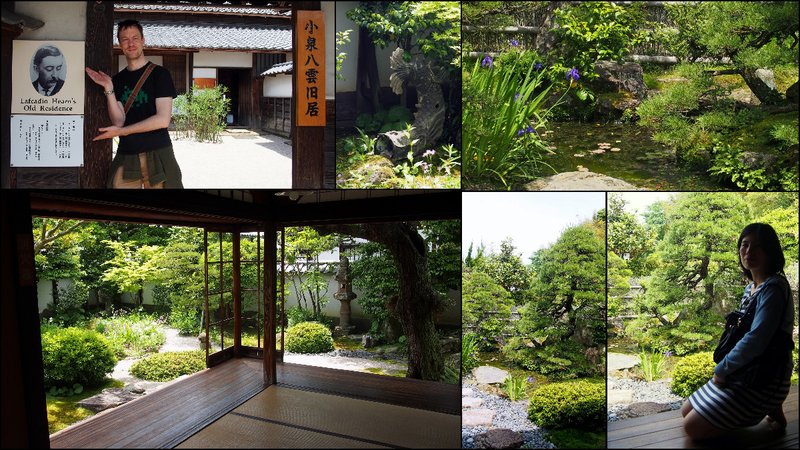 Visiting the house was only part our Hearn heritage trail for the day though, he also wrote about an Inari shrine that he liked to walk in the grounds of as he went to and from work. As Inari (fox) shrines have long been my favourite type of shrine in Japan, and with the added Hearn connection stopping off for a visit was a no-brainer. On the way though we passed by a small cafe selling dango that looked too good to pass by. 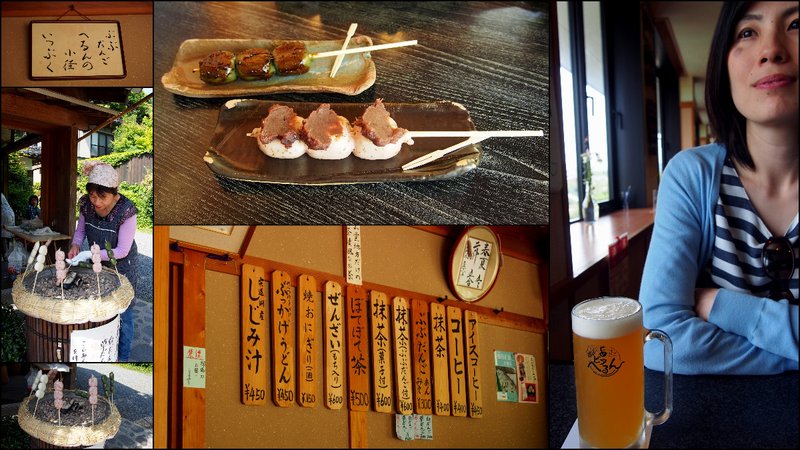 Once we'd had delicious dango and a drink we continued on into the shrine itself. A real treasure trove of kitsune, with more foxes than you could shake a stick at. Some modern ceramic, some ancient stone older than Hearn (and now with almost no face and held together with wire). The shrine was a beautiful, peaceful place and I can see why Hearn loved it so much, it was also a great way to wind up our time in Matsue... and pretty much my time in Japan. 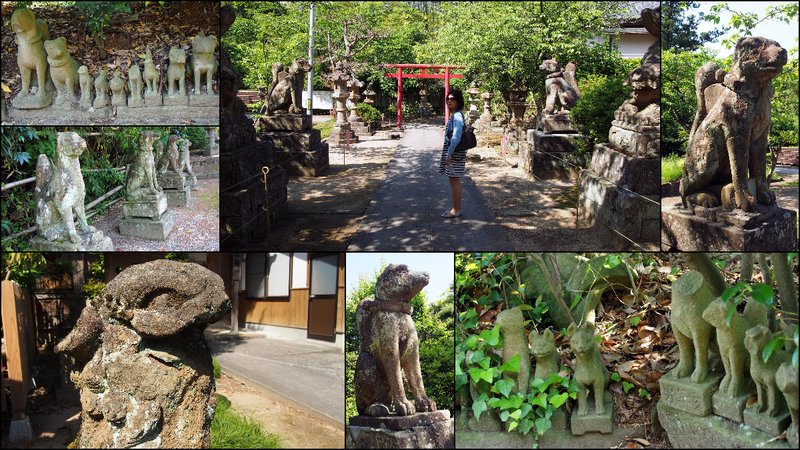 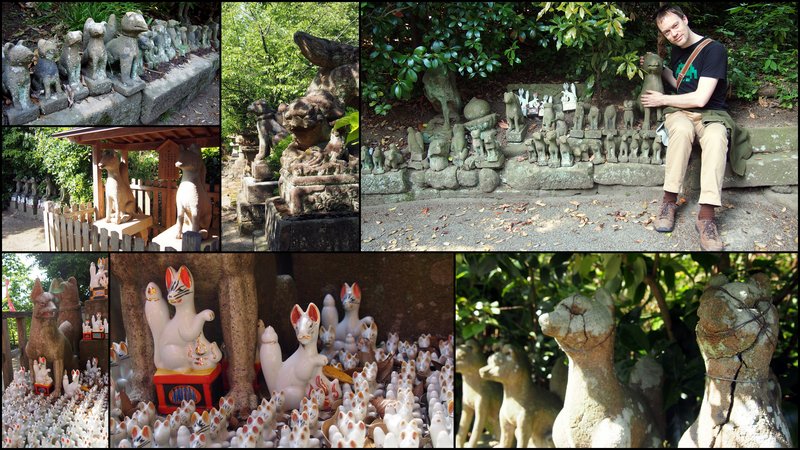