London: Greenwich and the South Bank 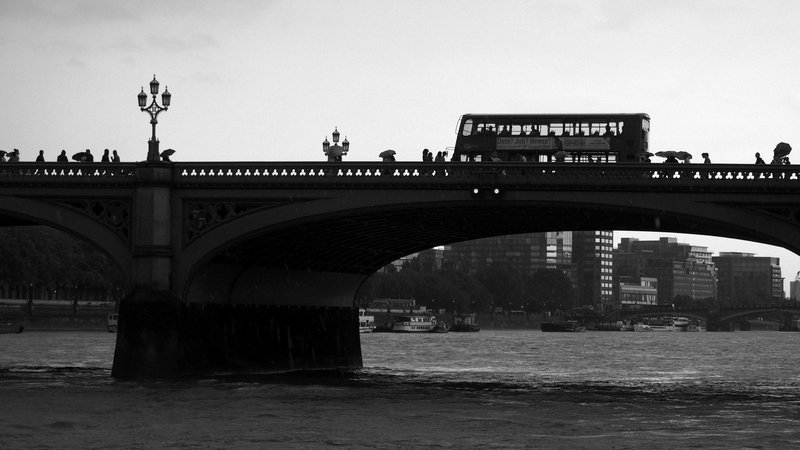 We fly into London in late July, as a gift to myself (and to make it easier to leave Japan) I've timed this so we can see Derren Brown's Infamous show while we're here. So that's where we go almost as soon as we arrive. I've wanted to see him live for a long time and now I have the chance - really good show btw. 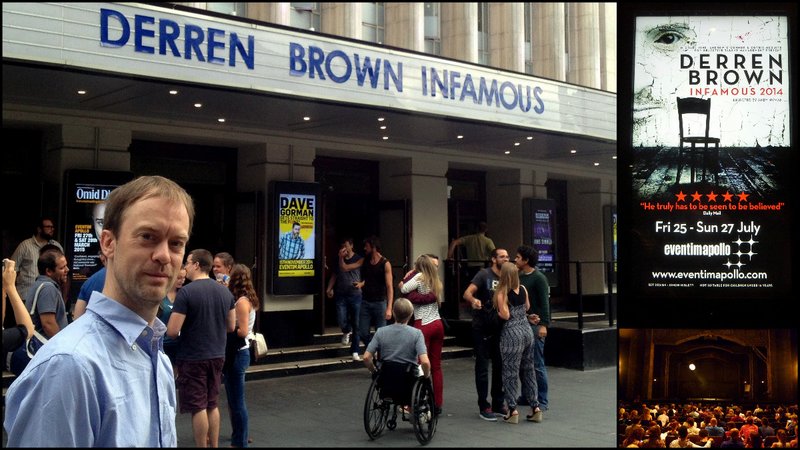 Of course were staying in London for a few days before heading back to Nottingham, and we've made quite a lot of plans. Our first full day back we've planned to spend some time exploring Greenwich. Which is one of those places I'm pretty sure I visited as a kid, but I don't really remember it. To make the journey a little more interesting we're heading there via the Thames on a water taxi which boards just opposite the London eye.

We pass by a lot of famous landmarks as we go including the Tower of London, the Shard and the H.M.S. Belfast now permanently moored on the bank. 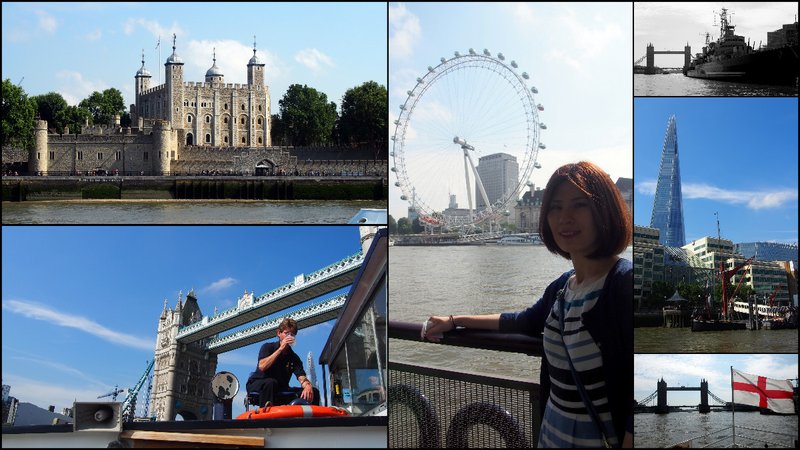 Although it's a cheap water taxi and not an official tour boat, one of the crew gives some stories and history about what we can see as we go. It's all very interesting, in particular when you think what a vital role the river once played in international trade; with boats from all over the world carrying goods in and out of the city. Once this river would have been teeming with life and moorings, docks and ware houses would have lined it's banks. We still pass quite a few tugs and working boats on the way as well as a some pleasure boats out cruising. One highlight being that we passed a high masted ship just near tower bridge, meaning we got to see the bridge open to let it pass directly from the river. 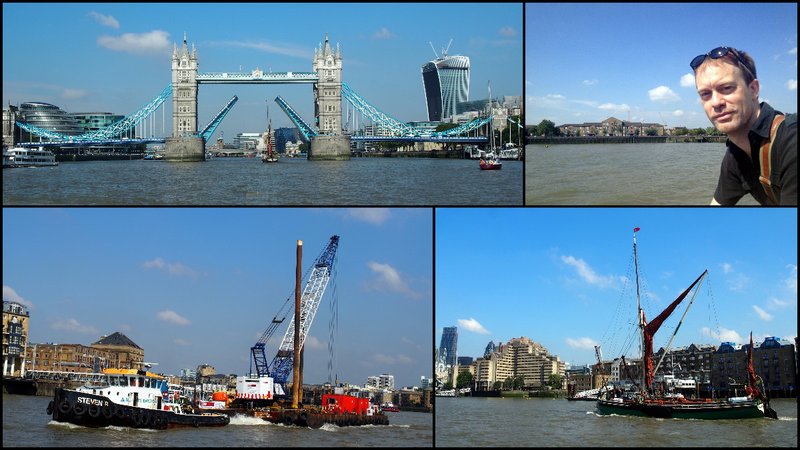 Greenwich of course has a long-standing connection with all things marine thanks to also being the site of the Old Royal Naval College. Built on the site where a royal palace once stood, and originally intended as a hospital for seamen, construction began in 1696. After the hospital closed in 1869 and was soon re-purposed as a naval college; which is by far it's most famous incarnation. 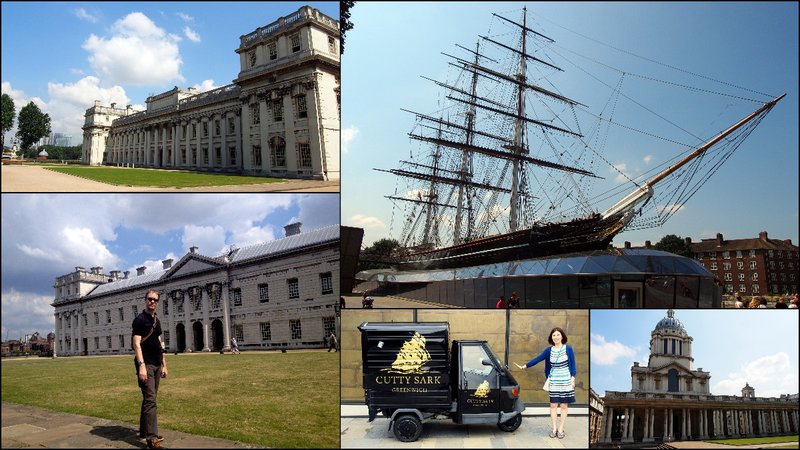 These days the complex is managed by a charity who maintain the grounds which are open to the public along with several of the buildings; including the famous painted hall. Chances are you've seen these buildings several times without knowing it as the college is now a hugely popular filming location for big movies. Marvel filmed a huge action sequence for Thor: The Dark World here, it stood in for Florence in one sequence in The Dark Knight Rises, it was the Lilliputian capital in Gulliver's travels (the Jack Black version), Johnny Depp's Capitan Jack met the King in the painted hall here in the fourth Pirates of the Caribbean film, Bond attended a funeral here even of lot of Les Misérables Parisian scenes were actually filmed here in London. That's not even mentioning The Wolfman, Robert Downey Junior's Sherlock Holmes, Lara Croft: Tomb Raider, Jackie Chan's Shanghai Knight's, The Madness of King , The Mummy Returns, Sense and Sensibility, Sleepy Hollow or Four weddings and a Funeral (for one of the weddings). I could go on, but suffice to say it is one of the most filmed spots on the planet. 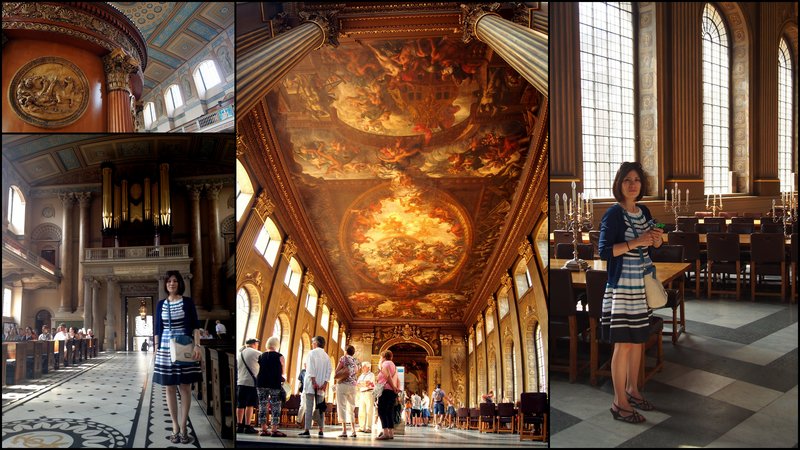 To really see the college at it's best though you have to get a bit of distance from it, and the best way to do that is via another piece of amazing Victorian engineering (though technically it's Edwardian as it was built in 1902, one year after Victoria's death) a tunnel that runs under the Thames to the North bank. 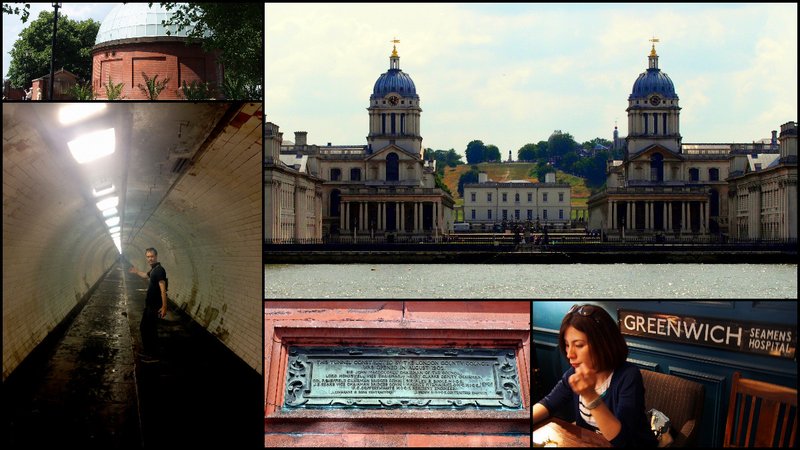 From there you can really see the wonderful symmetry of the main college buildings that frames the Queen's house in the centre; a former Royal residence that's actually a much older building than the college itself, dating all the way back to 1616. It isn't surprising that the college has been described as the 'finest and most dramatically sited architectural and landscape ensemble in the British Isles'.

After a spot of lunch we cross under the river again and climb the hill behind the college, from this perspective the college seems almost otherworldly and out-of-time set against the vista of modern London. Though we are now at another famous Greenwich historical site, the Royal Greenwich Observatory. Commissioned in 1675 as part of the race to be the first nation to crack the mysteries of longitude and become the masters of global navigation. Whilst Latitude was relatively easy to calculate using a quadrant or an astrolab, longitude was a much more tricky proposition and for a long time lunar observations was the only method available (though the instability of ships made readings difficult and inaccurate). Any nation that could find a better solution to the problem of longitude would have a huge advantage in international trade and political power; so much so that the British government passed a the longitude act in 1714 offering prizes to anybody who could discover a practical solution.

The problem was eventually solved in 1773 by a watch maker called Harrison whose marine chronometers allowed time based calculations to be made. Though due to the expense and difficulties of making chronometers luner observations were still the primary method of navigation. Luckily between 1765 and 1811, Nevil Maskelyne, Astronomer Royal at Greenwich published 49 issues of his Nautical Almanac based on lunar observations made from the Greenwich observatory. These became the global standard for oceanic navigation and earned Greenwich the role of becoming the zero line for longitude - it became prime meridian with an actual physical line running right through the observatory grounds. 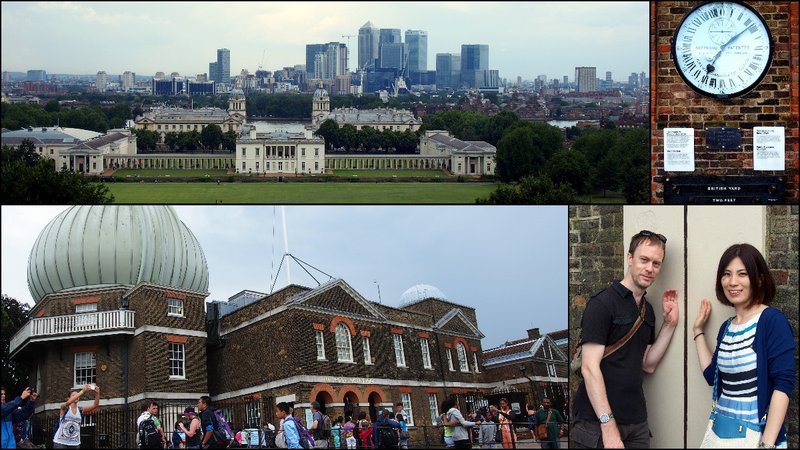 The whole story of early navigation, the age of exploration and the quest for longitude is one that really interest me, so it was a real treat to come to place that played such a vital role in that drama. As well as seeing the prime meridian and one of the telescopes within the observatory, we also had some time just to enjoy the park and grounds 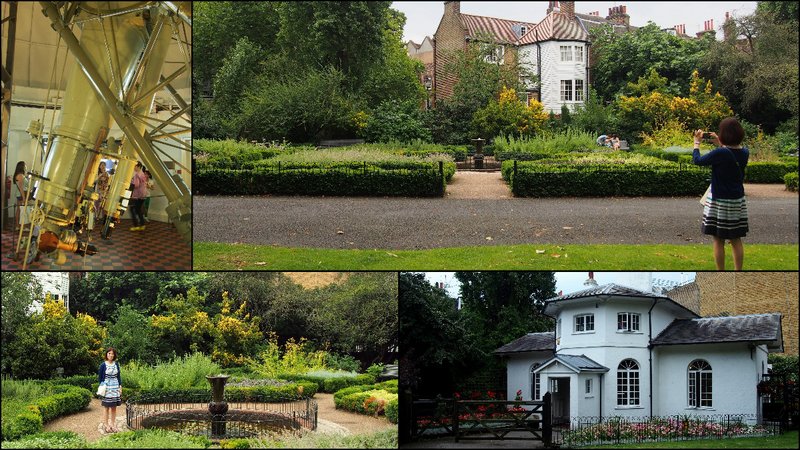 Finally we headed back to the riverside and the water taxi to head back into the centre of London after a really nice day out. 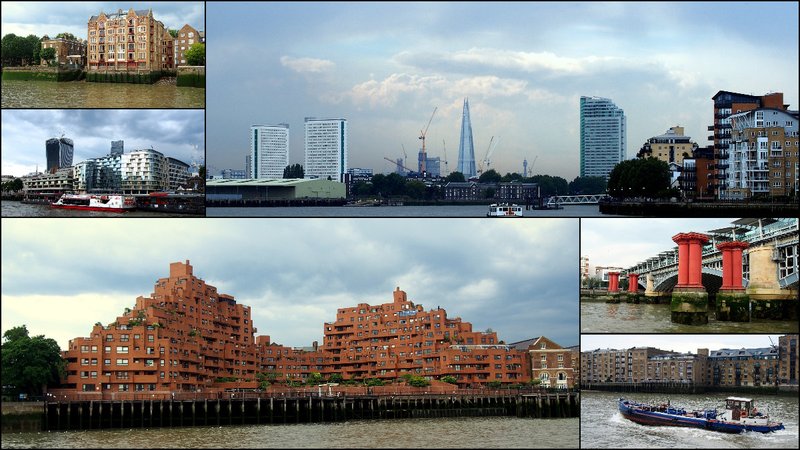 The next day we were staying a little more central and modern with a visit to the Urban festival on the South Bank; a celebration of all things hip hop and street. Where saw a bit of BMX action, some free-styling and some dance offs. 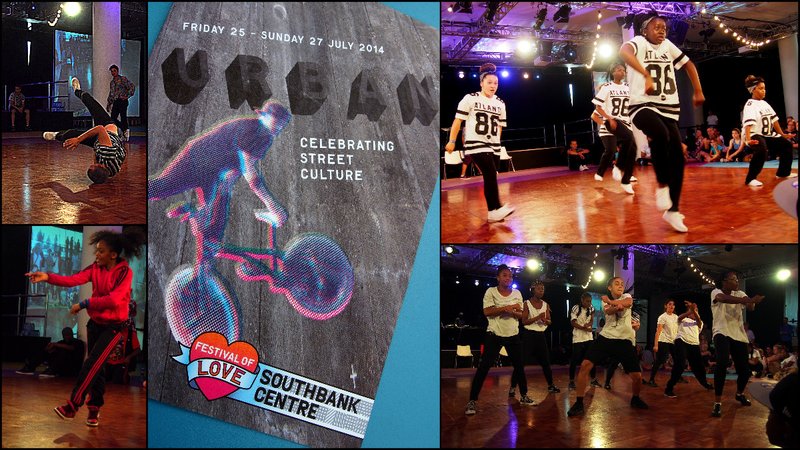 We also went to see a proper circus sideshow, I mean how can you resist when The Lizard man is drumming up business outside? Not only tattooed from head to toe The Lizardman also has five horn implants, elongated ear lobes, sharpened teeth and (of course) a forked tongue. 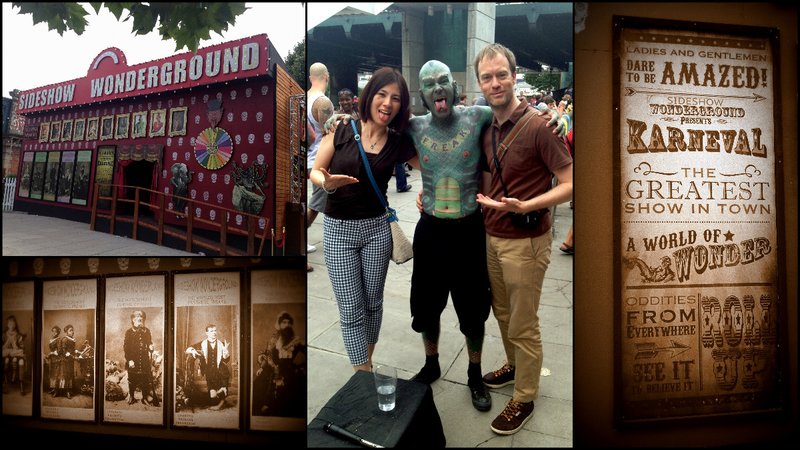 The show consisted of three performers, firstly the Lizard man himself who talked us through his body modifications, showed off his tongue dexterity, lifted weights on his earlobes and introduced us to hi special nasal corkscrew! Next up was a fire-eater whose rand finale was putting out a blowtorch on his tongue!! And if you're wondering how you top that, well you bring out the world record holder for skin elasticity, Gary 'Stretch' Turner!!! Oh boy, I'm still squirming just thinking about the things I saw in that booth, but it was all presented in with good humour and a split-tongue firmly in cheek making it both unique and thoroughly enjoyable. What can I say - freak c'est chic. 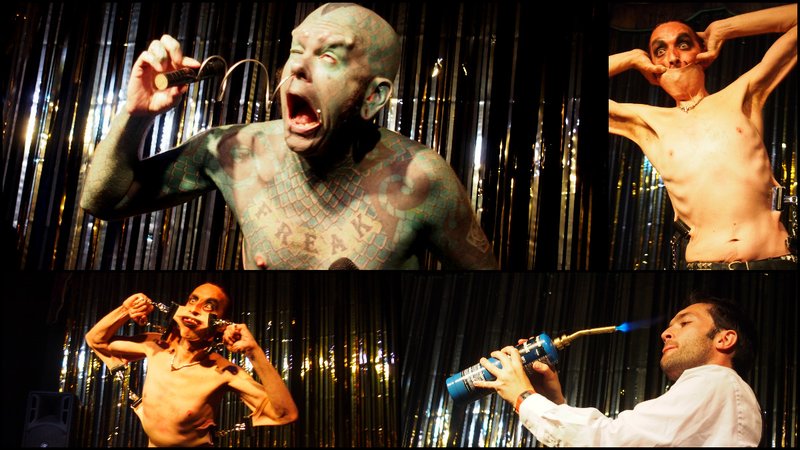